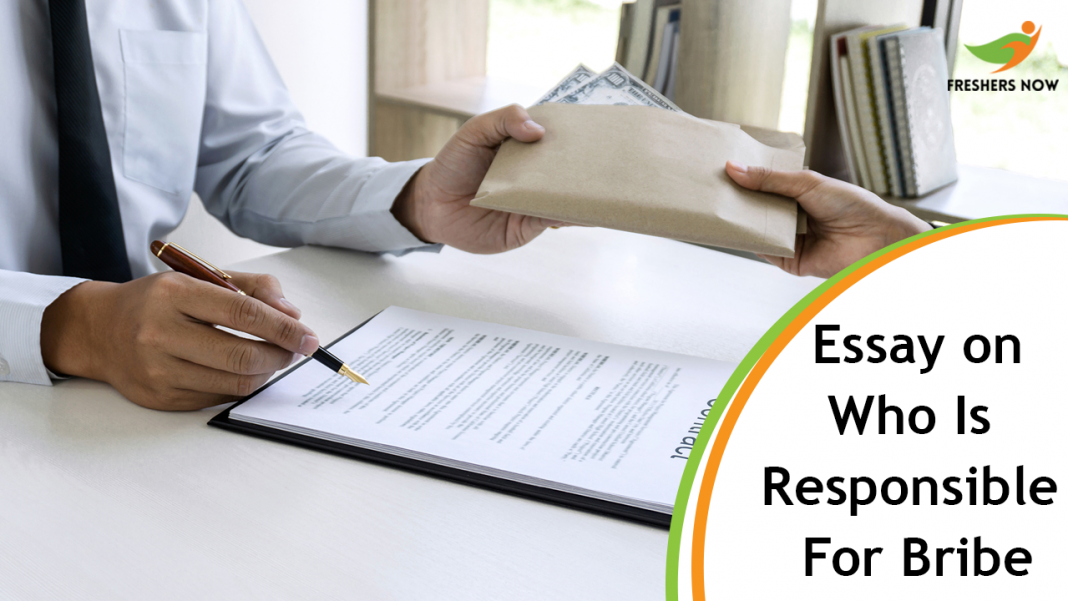 Bribery is one of the illegal acts or criminal acts happening in every part of society. Bribery is nothing but the transfer the money, goods, offers, asserts, and many more between the giver and taker of bribery. It has been built deep inside the society and also in human’s daily routine. In the present day, bribery had become the answer for the people with power or politicians. However, from the time it started, there was a debate arose as to who was responsible for bribing either giver or taker. In the below essay on who is responsible for a bribe: Giver or Taker will explain the issue happening in society. It also includes the issues and problems faced by the people with bribery and many other needed information.

Short Essay on Who is Responsible for Enforcing the Bribery act

Bribery is one of the unlawful things happening in every part of society. It was usually done to fast up the work process and also work can be approved even if it was illegal. So here the bribery will take place as the bribe giver will pay to the bribe-taker is official or politician. The transmitting of money asserts, funding, sponsorship, jobs, promotions, profitable contract, commissions, gold, and all other valuable things. However, in the process of bribery, both the giver and taker will profit and both are equally responsible. The bribe giver will bribe until he thinks that he will gain more profit or it will be an advantage for him. Similarly, the bribe taker will think that he can gain some money without any physical or mental effort for the work. In this way, both will attain profit in an illegal way which is against laws and damage the economy of the country.

Bribery is the process of happening for the past many years. It was encouraged by the people and continue the question arises like who is responsible for the process rather than to demolish the activity in society. Whatever both are equally wrong which has been seen in the major happened cases, but in some situations as the taker will demand the money. The responsible for the bribe is not the giver or taker, the system that was corrupted is responsible. The corrupted system in the society was not been changed from the past when the bribe issues arose. Finally, the government should bring up the laws and rules which lead the severe punishments for both givers and takers depending on the situation.

Bribery is one of the most corrupt practices observed in all parts of the world. It was inculcated in the lives of the people in their daily routine. Bribery is developed in every person’s life from their childhood, in childhood the mother bribe the child with chocolate when crying. After childhood to join schools they ask the money for the seat or admission in the school, the bribery is in name of donation or funding for the school. The common bribe which we see daily is bribing the Traffic police to skip the fine or challan for violating the traffic rules.

Majorly in the Government sectors and some private sectors officers do their work only with bribery. For some of the government officials have the bribery amount will be double or triple their official salary. The people in the society were offering a bribe to the officials to get their work done or approval of permission from the government. It had become an easy way for the people to get profited on either side of giver and taker. The bribe taker and Bribe giver will think about the profits in their way while they are committed to working.

However in the process of bribery majorly both the giver and taker have an equal role and in some cases, the taker will demand money to get the work done. The government officials, Policemen, Politicians are the major people in encouraging bribery and corruption in society. These are the people who should work for society and politicians are the one who rules society. People of the society will not choose the person while casting their votes rather they cast their votes for a member who bribes with more amount to cast. In government offices, takers demand the money to get approval.

Usually, Bribery is divided into two types i.e, Collusive bribery and Coercive bribery. In Collusive Bribery, both the giver and taker are engaged and accepted for doing the process for mutual benefits. In this type, both are punishable under the acts as both are equally responsible. On the other hand, Coercive bribery refers to the taker is demanding the giver for money and types for the approval of permissions. In this bribery, the taker will be punished when the victim or giver raises the complaint against the taker.

The Prevention of Corruption Act of 1988, The Indian Penal Code, 1960 is the two laws in the Indian Government for the people involved in bribery. According to these acts, bribery is a punishable offense in society. However in Indian Law for many years the giver is not considered in the offense and the process. But the laws are amended according to the Prevention of Corruption Bill of 2018, it was an amendment. According to the new amendment both the giver, taker, and if any third party involved in the process of bribery are punishable by the laws of the government. The people who are responsible for bribes will be imprisoned and fined according to the level of illegal activity.

As bribery is an illegal activity both the Giver and Taker are equally responsible in the process of bribing. There should be a need to consider the situations and punish the people with the major part. The governments of the countries should bring up the laws and amendments for any case of bribery and keep a checkpoint to it. The people should be educated by the No Bribery posters in government offices, Advertisements, No Bribery campaigns, etc. The government should bring up the forces like Anti-corruption forces, Special courts, and many others to develop the fear in people to encourage it. Every person in the world should be educated about the drawbacks of it in society and not spread to future generations.

Quotes on Who is Responsible for Bribery

Conclusion: We believe that the above Essay on who is Responsible for Bribe: Giver or Taker had provided some unique stuff and some facts. The above essay will be helpful for the students in Exams & competitions, Aspirants like UPSC & SSC.

Dear Students and Children, you can download the Who is Responsible for Bribery Essay in the Hand Written Format by Clicking the Below Click Here Link.