Unemployment is one of the major issues that was faced commonly by the people. It is the biggest challenge for the populated countries. Unemployment is nothing but the scarcity of jobs for people with skills and talent. There are several reasons behind Unemployment because of the failure of the government and companies investing in the country. Unemployment is always a task for the governments of the countries with densely populated to provide opportunities for all the youth of the country. The unemployment rate is more in the age group of 18 to 25 years which is nothing but after graduation. As in the world every year a lot of students being graduated and getting ready for the jobs but due to several reasons, the graduates are unable to work. There are various reasons for the Unemployment in a country namely demand for skilled people only, Imbalance ratio of opportunities, and graduated people.

Unemployment is falling due to the big and famed companies need only the skilled people, who work smart and intelligent. But the freshers can’t get into the job immediately after graduation. Because the company wants only the people who have experience, without any experience the company will not offer jobs to the freshers. There the unemployment is being increased every year. There is some kind of people who only wants to work in their interested sectors and fixed work based on this also the unemployment increases because they keep waiting for the jobs that they are interested in. As the world is going forward with machines and their technology, the usage of robotics was increased. Due to this, the unemployment rate was boosted to the next level and resultant unemployment in every sector. Unemployment cannot get the solution overnight or in one day, everyone should work for a long time goal to reduce the rate of unemployment.

Unemployment means the people who are seeking a job but are unable to find a job. There are a huge amount of people with a scarcity of jobs around the world for various reasons. The Scarcity of jobs happened due to reasons like fewer skills, fewer communication skills, improper opportunities, lack of companies, and mainly due to lack of government ruling. The government and the development of the countries place an important role in the employment of people in the country.

According to the latest data of India, the urban area youth are more unemployed than in the rural area. This cause due to the urban atmosphere that the skill-less person expects a high-level job. These will not adjust and not start at low to reach high. No human in the world will not be high at the starting stage or the graduate stage. In India every year the unemployment rate will increase at 6.75% on average according to the previous year’s data. The unemployment rate and data of the employment will be under the Ministry of Labor & Employment of India. This ministry will look after the needs of the unemployed people and the need for opportunities for the youth will be seen.

The government of the countries should look after the development of the country to help the people to get employed. All the companies and many others should be brought to invest in their countries for the goal of reducing the rate of unemployment. Every year a lot of youth are coming into society as graduates but they should develop them according to technology by the government or the universities. In India, there are many schemes like Prime Ministers Rozgar Yojana which helps the unemployed in economic and skill development needs.

Unemployment is a human-made thing that appeared with a huge population and heavy competition. As technology is developing the youth should move on the path to achieve employment easily. As similar to the work of youth, there should be similar work of the governments of the country. The government should bring up the opportunities for the youth and help the youth with the scheme. Every government and youth should combine and fill the space at needed areas to abolish or reduce unemployment in their country. 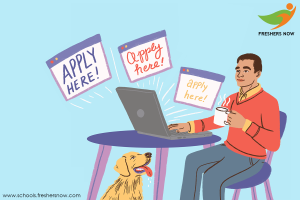 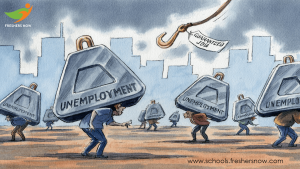 Dear Students and Children, you can download the Unemployment Essay in the Hand Written Format by Clicking the Below Click Here Link.