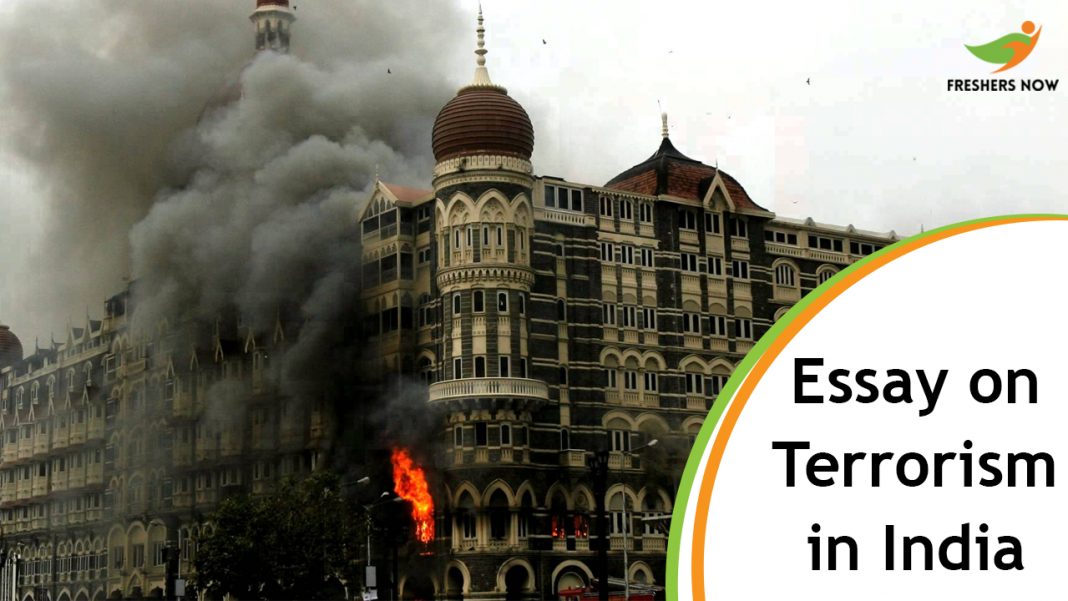 Short Essay on Terrorism in India

Terrorism in India began long back and had a great past for the country. For India, Terrorism is the curse for the development of the country and results in still and developing country in the world. All three forces of India work for the security of the country. However, terrorists are the people who can give up their lives to kill other people in name of various things. Terrorism in India is due to the neighbouring countries China and Pakistan for the border issues of Land in Jammu and Kashmir. The major part of Terrorism in India is due to Pakistan as the country separated from India but still with the issues that happened in past. Both the countries had issues about land, power, and many others. Any Country will fight for the power and occupation of the country and make the people slaves for their country also to expose the power to the world.

Terrorism in India is not only with the other countries but also some domestic violence in the country. The Naxalites are the domestic terrorists who fight against the rules in their states. They will harm the people who are against them who belong to the government. They are majorly in Odisha, Jharkhand, Bihar, Andhra Pradesh, and a few states of India. There are many places all around India affected by Terrorist attacks and a huge number of common people are affected by those attacks. India has the strongest Defence forces and occupies the top 5 places in the defence forces of the world. Many secret forces work in other countries and give information to the country about the plans going to implement. However, terrorism in India is a continuous process until the neighbouring countries open their eyes and deal with everything with peace and harmony.

Long Essay on Terrorism in India

Terrorism in India is a curse of the country and its development process. India had a large number of Terror attacks and a large number of people were lead to death due to terror attacks across India. Terrorists are the people who were trained and motivated in a negative direction. Some of the Terrorists will work for the money and some work in the name of God. All the terrorist attacks in India are due to the neighbour country Pakistan. There are many issues which are not solved in the long past and the major issue is with the land division in Jammu and Kashmir in India.

Terrorism in India is due to expose their power in front of the world and also to collapse the name and fame of the country. As the country with more Terror attacks, no country will work with them and never shows interest to invest in the country. As Terrorism and attacks are high the country’s insecure also lag behind the education rate, economic development, etc. Terrorism has groups where are these groups are trained by the countries to use the weapon at needed times. Other types of Groups are private groups that kill people in name of god.

However, India is one of the top countries that suffer from terrorism from neighbouring countries. There are a large number of attacks that happen in India every year the rate of attacks is increasing day by day. As India has a large border area with many countries, many border forces secure the country day and night. But the Terrorist enters the country because of the large area. Every day there was a fight with Pakistan even they committed some rules with India in the past for peace. India is a country that fights peace against all countries.

Terrorism in India also contains the Naxalites and Maoists who raise the violence against the government for the demand of the needs. The States like Odisha, Jharkhand, Bihar, Andhra Pradesh are the areas that contain Maoist areas. The Maoists or the Naxalites are the Indian people who live in the tribal areas and these people move negatively due to lack of education. These people majorly attack government officials and politicians to expose the power to get their demands. All the state government police and forest police work to extract the badness in their minds and preach them by some punishments.

In terrorist attacks like Mumbai 26/11, Parliament Attack, Mandai Massacre in Tripura, 1991 Punjab killings, 1993 Bombay Bombings, Rafiganj Train Wreck Bihar, Mecca masjid bombing Hyderabad, and many more attacks happened and still happening every year. A huge number of common people were lead to death and injured in these attacks. The count of Soldiers at the border is countless. At the border, there are attacks on soldiers irrespective of day and night. Terrorism in India can get to an end only if the neighbouring countries change their mind and fight with laws on any illegal activities. Countries with a huge rate of terrorism need to change their people and private terrorist groups can also get an end if all the countries move together.

India is a country that thinks to deal with everything with peace and harmony. The people in India are always united in any situation. As terrorism is a man-made thing where it can get to an end if all the countries work together. Terrorism in India is one of the major things which obstacles development. It can be ended if the country takes hard decisions towards the other country’s terrorist and domestic terrorist. Terrorism in India is due to the liberal decision taken by the government of India.

Quotes on Terrorism in India

Terrorism in India for Students and Children | PDF Download

Dear Students and Children, you can download the Terrorism in India Essay in the Hand Written Format by Clicking the Below Click Here Link.