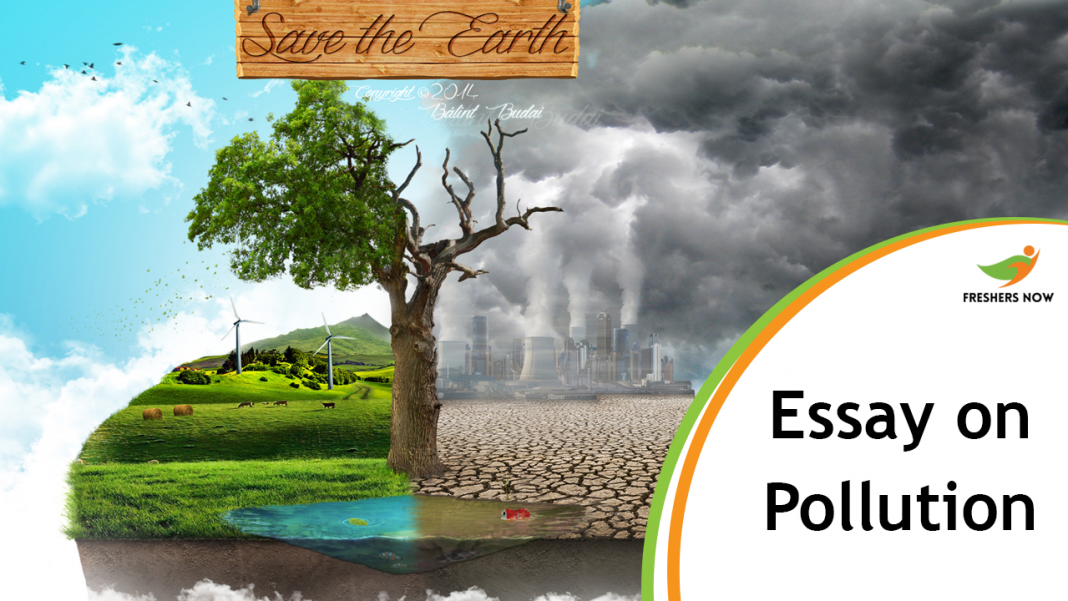 Pollution Essay For Students & Children: Pollution refers to the mixing up of impurities with useful pure products. Commonly we know this pollution as Air pollution, Water pollution, soil pollution, etc. Pollutions are nothing but disturbing the pure contents in a particular product and mixed-up impurities imbalance the ratios in it. However, in the present world, all the available things are polluted in any of the ways and damage the worthy environment and the health of the people. Similarly, the below pollution essay will include the causes of pollution, types, hazards to the environment and future days with pollution, and much more information. In further below of the article Quotes on Pollution are listed.

Pollution is a common and serious issue in today’s world. However, pollution has existed since the birth of earth i.e before human existence also. After the birth of the Human with intelligence started using nature. In way of development and using of nature the pollution has arisen. The result of the development pollutes natural resources like Air, Water, Soil, etc. The mixing up of toxins, harmful gases, chemicals, Improper sewage treatment, and many more are the causes of the pollution of various natural resources.

Humans started reaching their needs with development which extracts some unwanted which will harm the environment which leads to pollution. Human development like Industries, Vehicles, Deforestation, etc causes the Air, Water, Soil Pollutions. There is a huge number of pollution present on Planet Earth. Majorly the natural resources which are polluted by humans are the basic needs for human or human existence. As these are the important needs for human live existence which results in demand for need in pure form. By this, pollution had become an issue for human lives.

As the contaminants in the essential natural resources are not useful for the living lives on earth. However, humans themselves pollute things and clean things for their uses. When the contaminants in the resources make the imbalance the contents in resources and cause diseases for humans and harm to the environment and ecosystem. So every person on earth should feel responsible for saving the environment in a harmless way of utilization. Even now the damage to the environment can be healed by following the proper and saving ways by humans. Some of the damages cannot expose the results in a limited time but the humans need to follow till it heals.

These days the word Pollution is aware by the people around the world. Every living being on Planet Earth is facing the problem of pollution directly or indirectly. As pollution is the harm to the environment and the ecosystem where it damages the environment and changes the conditions for living life. Pollution is adding up or settlement of contaminants in natural resources like water, air, land. As pollution changes the goodness in the resources and these resources are essential for human life on earth. These pollutants are harmful to the human lives and health of living beings so it tends to need an end to the pollution. As it was a hazard to worthy environment and humans so it became the need aspect to get a solution for the further existence of lives and the environment.

However there are various types of pollution produced on earth but the major blow for human is by Air, Water, Soil Pollutions. As the human body contains 60-75% of the water every human needs 3-4 liters of fresh water for drinking. On the other hand, fresh water is available at only 3-4% of the total water on Earth. Humans started occupying freshwater resources like rivers, lakes, ponds where efficient storage was not present. Similarly, the available water is getting polluted by the industries extracting the chemicals, improperly treated sewage, human waste, etc.

Air is one of the essential needs of living lives on earth. Without air, lives cannot exist and even the whole environment cannot exist. Humans to reach their needs started using vehicles and depending more on industries. These vehicles expose the harmful air and even the industries release the chemical mixed gas in the air. These gases are harmful to human beings and result in breathing and lung infections and sometimes they lead to death.

The other important effect of polluting was the soil. In present days the farming sector is effecting by this soil pollutions. This affects humans in improper cultivation and tends to the scarcity of food and food droughts. As some of the industries store the chemical extracts on the bounded land which starts polluting the soil in and around the stored area. Using fertilizers, pesticides, and harmful chemicals in the farming sector will also cause soil and water pollution simultaneously.

As a result, all the pollution is caused by human beings knowing to level the needs of their daily routine. But all humans cannot the worth of these resources and if these are completed polluted then it will lead to an end for lives on planet earth. Whatever using the resources in harmless or pollutionless ways is good for the present and future generations on earth. There are ways to resolve the harms that cause to the environment and the natural resources. For every pollution way of production, there is an alternative way in the eco friendly where the humans are not considering. As the population around the globe increases and to reach their needs faster all the harmful ways are encouraged by the people.

The environment is the worthy aspect of Planet Earth. For the existence of the lives on Earth, natural resources are more important. All the eco-friendly development and techniques need to bring up, encourage, and inculcate in the human’s daily routine. Reducing the use of industries, using public transport will decrease air pollution. Proper treatment of sewage, reducing the use of fertilizers and chemicals reduce water and soil pollution. Storing properly treated chemicals will reduce soil pollution. However, all the pollutions are human-made and there is a solution for all the pollution which can change by human activities. Stop Pollution and save the environment for the future.

Conclusion: We believe that the above essay on Pollution will help you with your needs and help to inspire you in saving the environment. This Essay on Pollution and its hazards will be helpful for the students for their exams and aspirants of UPSC.

Dear Students and Children, you can download the Pollution Essay in the Hand Written Format by Clicking the Below Click Here Link.