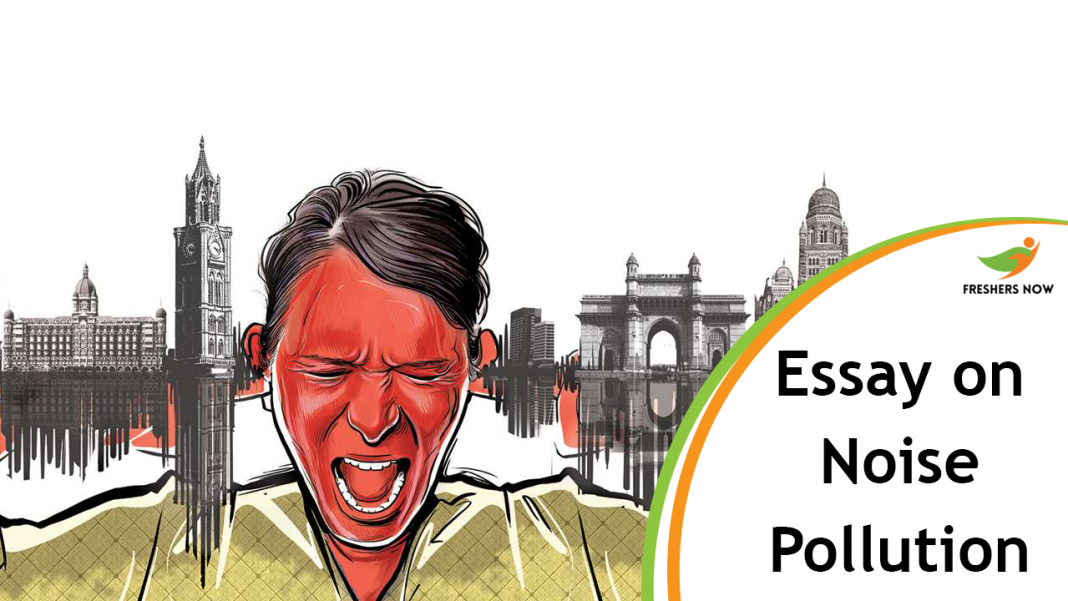 Noise Pollution Essay For Students & Children: Noise Pollution is one of the uncontrolled pollutions in the present world. Noise pollution also refers to Sound Pollution which is caused by humans only. With the increase in technology, humans started inventing new things and these inventions produce noise or sound during the process. Every invention in the present day of the world is giving out noise either in a small or large amount. By the noise pollution, there is damage to the environment and health issues for humans like eardrum problems. Similarly, the below Noise pollution Essay contains the effects, causes, and some remedies for the reduction. Further below Noise Pollution Quotes are listed.

Noise pollution is caused by human activities and the inventions of humans for their needs. With improvement in technology, the needs of humans are working by humans to decrease physical effort. These machines give out huge sounds during the process. Noise Pollution means the high range of sounds that are at higher decibels. Produced high decibels noise will disturb the environment. Humans and wildlife are troubling by noise pollution. However, the cause of noise pollution is by humans in various ways. Automobiles used by humans are one of the major sources of pollution. Airplanes, Trains, Ships, Trucks, etc are also the sources. On the other side industries for human needs are also produce a high amount of noise pollution. The exhaust Fans, Compressors, Machines, Electrical Transformers, etc are the parts of noise pollution.

All types of equipment in the house also produce sound and these are also added to the level of noise pollution. Mixers, A.C, Grinders, Sound Systems, Televisions, and many more are some of the part of noise pollutants in household areas. Rather than these celebrations, meetings, mining is the added source for the production of noise. The damage is major to animals and humans. This pollution disturbs the various environmental cycles. Solutions to noise pollution are present which helps in the production of noise or sounds. Planting of Trees, Using of low decibel horns, Anti Noise vibrators and many more are the control step in reducing the pollution. Decreasing the level of noise pollution will help to build a healthy environment for further generations.

Noise Pollution refers to an increase in the level of noise rather than the normal level. The level of noise exceeds the allowed level it becomes dangerous for all living beings. In present days noise pollution was increasing at a rapid rate and became a deadly issue. The increase in pollution will lead to harm and form an unsafe environment. The living beings and environment will disturb and lead to harm or dangerous atmosphere. However, the cause of noise pollution is humans and their activities. Animals and birds are led to die and move to the endangered list.

Noise pollution causes psychological problems and hearing problems for all living beings. For humans, noise pollution will damage the eardrum and lead to def which ruins the whole life of an individual. According to the level of noise, some animals and birds will get harmed and some types of them are lead to death. Dolphins and whales are the most affected aqua mammals by noise pollution in seas and oceans. Noise pollution was generated by all human developments and the process of development. Some of the natural disasters like floods, volcanic explosions, thunder are also producing noise at a higher level. These nature calamities produced a sound that will harm the environment.

A huge number of causes are present in today’s world for noise pollution generation. As the development and intelligence of humans increases, the needs of humans are processed by machines. These machines reduce the physical work of humans and give out a large level of output. However, depending on the machine the level of noise produced is either high or low amount. Industries and vehicles take a major part in producing noise. In industries, heavy machines, Generators, Compressors, Heavy exhaust fans, etc will produce a large amount of noise.

Horns for the trucks, automobiles are the producers of noise on the roads. Airplanes, Ships, Trains had a part in noise pollution. All the appliances used in the homes also the noise producers but in a limited amount. Home Theatres, A.C, Televisions, Mixers produce high decibel noise. On the other side construction works, mining, explosions, are occupied some parts of sound production. Even the traditions and events like Meetings, Marriages, Diwali, etc produce the sounds occasionally in society. Society should find an alternative for the sound producers by extending the developing technology to the next levels.

Some of the effects for humans by noise pollution are hearing problems, persistent insomnia, mental strain, stress, depression, improper sleep. However, there are some solutions to reduce noise pollution to enhance environmental growth. Planting of Trees, Low decibel horns, Silent machinery, Eco-friendly crackers and instruments, Vibrators, etc. These steps will help to reduce the production of sound or noise in the atmosphere. Proper checking of machines in households and industries can even reduce sound production. The need for reducing noise pollution is to develop the mental and physical health of humans and the lives of animals and birds.

Conclusion: We believe that the above noise pollution essays include all the information about its causes, hazards, and reducing steps. We hope the Noise pollution essay will be helpful for children in competitions and aspirants of UPSC.

Dear Students and Children, you can download the Noise Pollution Essay in the Hand Written Format by Clicking the Below Click Here Link.