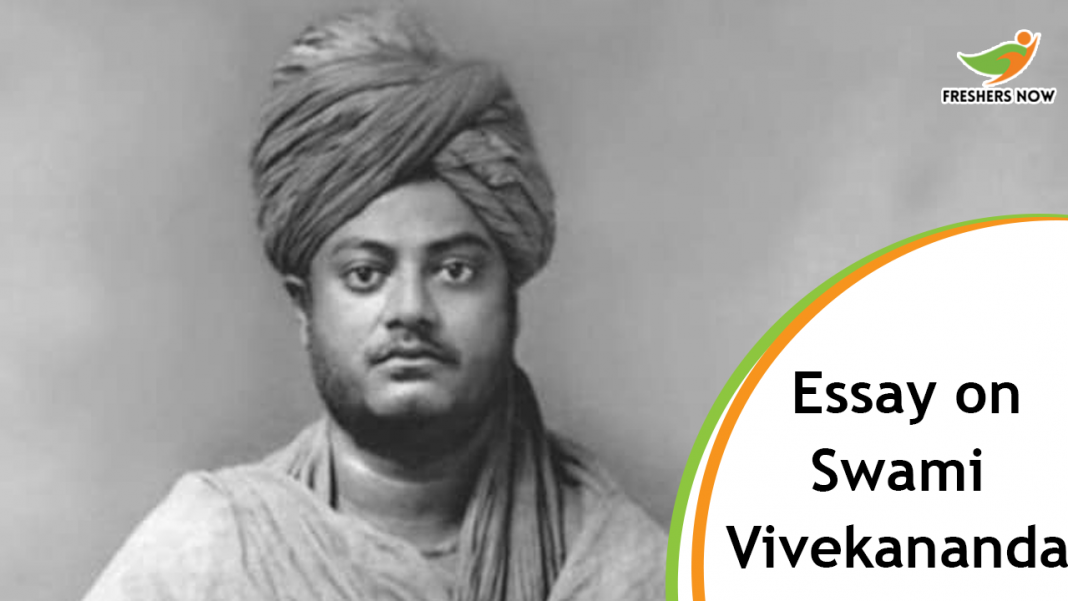 In this article, we have provided an Essay on Swami Vivekananda: An Introduction, Short Essay, Long Essay, Quotes, Images. The children and the needy students and those who want to know the life of Swami Vivekananda read the complete article.

This is a short and sweet Introduction to the Essay on Swami Vivekananda a glimpse of information. Swami Vivekananda is one of the great spiritual leaders and also called the Indian Monk. He is a very simple person with great qualities. Swami Vivekananda is called the Legendary person for India. His ideologies and preachings are highly touchable and they remain forever in the hearts of the people. He is very positive in all matters by maintaining peace and harmony. He was a disciple of Ramakrishna Paramahamsa and he followed the qualities and integrated the people across the countries with peace.

It is a Short Essay on Swami Vivekananda, his complete life, and his experiences. Swami Vivekananda was born on January 12, 1863, as Narendranath Datta in a Bengali family. Swami Vivekananda’s birthday is celebrated as National Youth Day. Swami Vivekananda’s parent’s father Vishwanath Dutt, is a lawyer in Calcutta, mother Bhubaneswarvi Devi. He joined Ishwar Chandra Vidya Sagar’s Institution at age 8 in the year 1871. Swami Vivekananda is a very smart and brilliant boy at his schooling. After he studied at Presidency College in Calcutta. Later he completed his graduation with a Bachelor of Arts in the year 1884. By the time he completed his graduation he gained complete knowledge on all the aspects related to Hinduism like Mahabharat, Bhagwat Geeta, Vedas, etc. After that, he learned languages like Sanskrit and gained a grip on Bengali Literature and Indian Philosophy.

Swami Vivekananda is a great philosopher who his preachings. His preachings were based on the principles of peace and harmony. Vivekananda is the main follower of Ramakrishna Paramahansa and he became a monk by the words of Ramakrishna. There on he started his life as a monk at the age of 25. Later on by the death of his guru Ramakrishna Paramahansa Vivekananda founded the Ramakrishna Mission to serve the people. He followed his guru all through his life and introduced Indian Philosophy to all the countries by the movement called the “Vedanta Movement” to enrich the people with philosophy.

At the speech in Chicago, he addressed the people as “Sisters and Brothers of America” and preached the importance of Hinduism. He also explained the presence of God and the existence of God. He gave his speech highlighting Hinduism and Philosophy. By this speech he became the role model and stood in different papers of the city. His works include Bhakti Yoga, My Master, Raja Yoga, etc. Later on, he founded Ramakrishna Math and Belur Math which included the purpose of serving people and education for children. Swami Vivekananda died on July 4, 1902, at the age of 39.

Here is the Long Essay on Swami Vivekananda a full view of his life journey. Swami Vivekananda was born on January 12, 1863, in a Bengali Kayastha family. Firstly, Swami Vivekananda was born with the name Narendranath Dutt and later called Narendra or Naren. He is one of nine siblings. His parents are Vishwanath Dutt, an attorney in the court in Calcutta, and his mother Bhubaneswarvi Devi, a very kind-hearted person and devoted towards God. due to his parents, nature towards the differents aspects shaped Narendranath into a well-mannered person with good qualities nurturing in him. He is mostly interested in the existence of God and philosophy at a very young age so his passion made him mold his future differently.

In the year 1871, he was sent to Ishwar Chandra Vidyasagar’s Metropolitan Institution for his schooling. Later on, in 1879, he scored first division marks in the Presidency College Entrance examination. Narendranath had complete knowledge of different kinds of subjects like history, social science, religion, etc. In the year 1884, he completed his Bachelor of Arts. By the time of completion of his graduation, he gained knowledge of Mahabharat, Vedas, Ramayana, Upanishads, Bhagwat Geeta, etc. He is showing his complete interest in religion.

Narendranath by his passion for religion asked many of the saints that “Have you seen God?” he is not satisfied by the answers given by the saints. In the year 1881, he met Ramakrishna Paramahamsa with the help of his friend Dakshineswar a follower of Ramakrishna. Thereafter with his friends, Narendra went to meet Ramakrishna Paramahamsa and after meeting his he asked him “Have you seen God?” he replied, “Yes I have seen God”. Narendra was satisfied with the answer. Then Ramakrishna told him that God is in every human and you can also see God in serving the people. Narendra by the words of Ramakrishna decided to turn into a monk. At the age of 25, Narendra changed his name to Swami Vivekananda. There on he started his journey as a monk.

Later on, he followed the principles of his guru and made his lifestyle simple by serving people. Ramakrishna developed throat cancer and he is not able to survive as more so he asked his disciples to follow Swami Vivekananda as their leader. On August 16, 1886, Ramakrishna passed away leaving all his responsibilities on Swami Vivekananda. Later, he took all the responsibilities and started Ramakrishna Mission under his leadership to serve people. He established Ramakrishna Math for education for the children. He also founded the Belur Math which includes the teachings of Swami Vivekananda, also the social work in it. Later he visited western states and led a movement called the “Vedanta Movement” which helped people all over the countries to know about Indian Philosophy. The movement was supported by many people in the countries.

At the Parliament of the World’s Religion, he started to address people as “Sisters and Brothers of America” and for these words, he got a stand ovation from the audience for two minutes. He gave a speech on the importance of religion and said that God is one and people choose different ways to worship God. He mostly gave his speech on Hinduism and Indian philosophy. He enriched people to know the significance of religion. After that speech, he became famous and stood up in National and International Newspapers in
NewYork city.

Swami Vivekananda’s works for the Indian Philosophy are Raja Yoga, Bhakti Yoga, My Master, etc. His works helped the people, followers to walk accurately. The works done by him are enormous for the country so he is renowned as one of the greatest people and a role model. Every year on his birthday of he is celebrated as National Youth Day all across the nation. Swami Vivekananda’s last breath was on July 4, 1902, at the age of 39. He knew that he is not going his complete the age of 40 and he passed away at the age of 39. 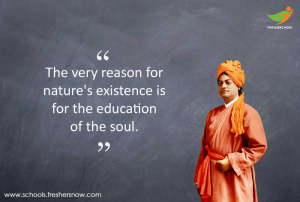 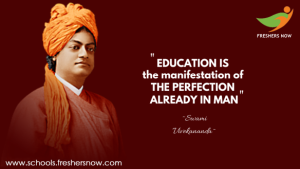 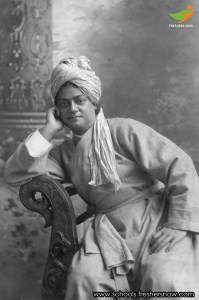 Conclusion: In the Conclusion of the Essay on Swami Vivekananda, he is considered the famous Indian Monk in Indian history. Vivekananda’s simple nature and positive thinking made him great with every little quality that he possessed. He believed strongly in God and made his efforts to feel and see God. His preachings were simply based on peace, harmony, brotherhood. Hence he is one of the eminent people in the history of India.

Essay on Swami Vivekananda for Students and Children | PDF Download

Dear Students and Children, you can download the Swami Vivekananda Essay in the Hand Written Format by Clicking the Below Click Here Link.