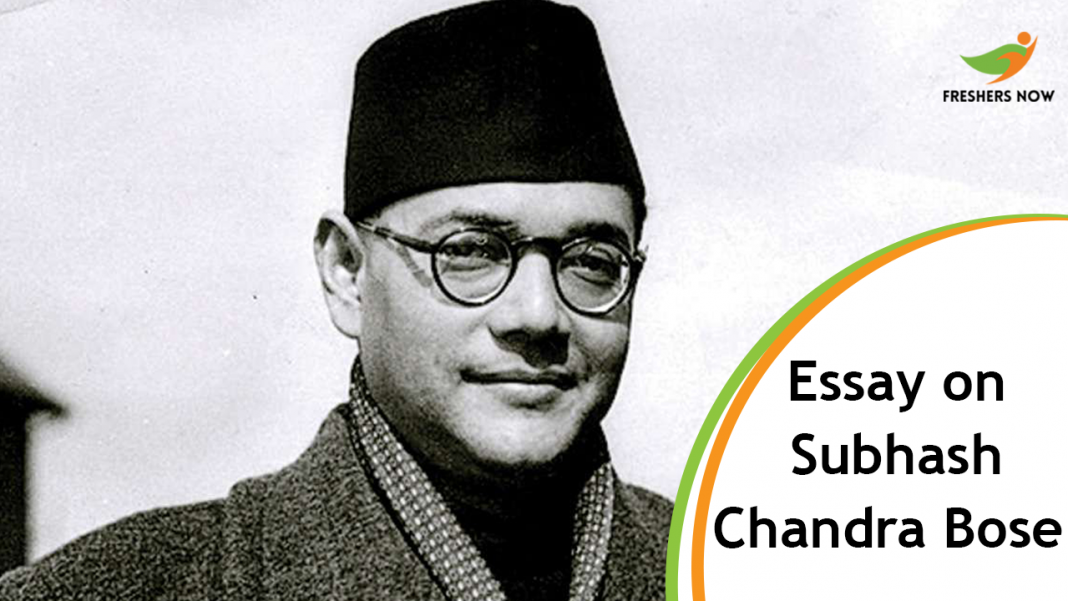 Subash Chandra Bose was the dynamic and most admirable human being by every citizen in the country. Subash Chandra Bose is popularly known as Netaji who was a brave Indian Freedom Fighter. He was part of the Indian National Congress along with Mahatma Gandhi and became the President in 1938. He is the one who fought against the British to let them out of his country. Netaji participated in the Indian Independence Movement.

On the other hand, Netaji is self-confident and a brave person. He is liked by most of the Indians for his words to save the country from British rule and he also taught the people of India to love their own country, raise the voice against their rights on their own land.

Bose in his childhood is a brave and smart boy, so his parents had confidence in him in every aspect of life which he does. Bose got admitted to Protestant European School along with the other children in the house. Later on, he was shifted to another school for his secondary education. There he secured good marks in his matriculation. He got influenced by the teachings of Swami Vivekanda and Rama Krishna and got a good impression of his religion.

Subhash Chandra Bose was inspired by Chittaranjan Das and also worked under him. Chittaranjan Das is a member of the Indian National Congress and he is the person who was very much liked by Bose. Subhash Chandra Bose started Swaraj a newspaper to make publicity for the Congress under the Bengal Province. Bose worked as CEO for Das and later worked as Mayor in Calcutta.

Later on, Subhash worked for the Indian National Congress, and there raised differences of opinion among the members of the committee. There is a difference in the opinions between the old and the new members in the committee and this made Gandhi and Bose form rivalry between the party. Bose left Congress in 1939 and formed All India Forward Bloc within the Indian National Congress.

Subhash Chandra Bose formed the Indian National Army (INA) with the support of the Japanese. The army which he had formed consists of nearly 40,000 fighters who can attack a large army on the other side in the war. The INA attacked the Northeastern parts of India but unfortunately, the Japanese were surrendered and the war is called off by the Bose.

Bose was joined Protestant European School and later on, he was joined Ravenshaw Collegiate School for higher studies there he obtained second place in his matriculation. Netaji is a very brave and intelligent student since his childhood. Thereon he was admitted to Presidency College and in the year 1919, he completed his Bachelor’s Degree in Arts in Scottish Church College. there on he was inspired by the teachings of Swami Vivekananda and Ramakrishna and felt that God is more important than his studies.

He gained support from many people from the different parts of the country from the outbreak of the war upon British rule. It continued for some period and there raised the difference of opinions in the Indian National Congress Committee. The new and the old members in the committee had variant opinions upon getting the Independence. There, Bose had the complete views and opinions in gaining independence in these opinions there is a difference found between Gandhi and Bose. So with that Bose left Indian National Congress and started his own party called Forward Bloc with the support
of his followers.

Subhash Chandra Bose participated in the Civil Disobedience Movement and he was jailed. Bose participated in the movements for the independence of India. Bose formed the Indian National Army with the support of the Japanese with the first committee towards the Eastern frontiers of Manipur. INA was formed by Subhash Chandra Bise and was also headed by him had an army of around 40,000 people from support from Singapore, Japan.

The Japanese took control over Andaman and Nicobar Islands and the provisional Government of INA is formed there in the year 1942. Thereafter bose asked for the blessings from Gandhi for the World War by his Army. Later on, the war took place and the Japanese attacked North Eastern Parts of India and after a while, the Japanese were surrendered to the British. Then there is a call-off for the army men to return.

After the retrieval of the war, Subhash Chandra Bose decided to return to Tokyo and then started for it. But unfortunately, the plane was crashed and Netaji passed away on August 18, 1945, at the age of 48. So by his death, the Indians were in shock about him. This made an undigestable word for his followers and the Indians too.

In the Conclusion of the Essay on Subhash Chandra Bose, the citizens of India still make him alive for the struggles he had made for India. Bose is commemorated in all the times for the brave fight he has done for the freedom of India. He is one of the role models for the independence struggle and for setting his own party for independence. Subhash Chandra Bose is recognized as the most popular freedom fighter in the history of Independence.

For more updates on education and for more essays on famous personalities of Indian History stay tuned to our website Freshers Now.