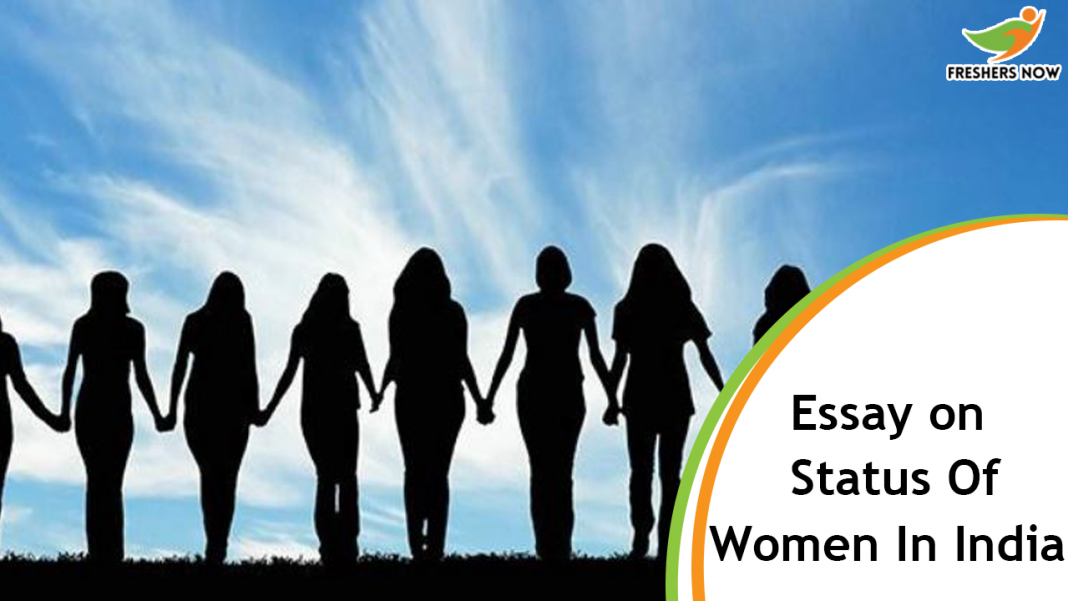 Women are the backbone of society to get developed and healthier. The women are the only ones who can give the generations for society. The world cannot be imagined without women but they are also part of God’s creation. The women are something unique for the people of India, if a girl is born in a family they will treat the girl as Goddess Laxmi in their family. Similarly, the below Essay on the Status of Women in India had covered a large number of unique points about women. The below essays also included the importance of women’s status in Indian Society.

Short Essay on Status of Women in India

In India, women had a special position in society and they were played a hugely important role in society. From the ancient days of India, women were treated specially in the families and the kingdoms. We have seen from the ancient period and ethics like Mahabharat and Ramayana that women had a powerful role. The women had the importance and if any were discriminated against women the individual will be punished. In such a way the women were treated and the status of women in Ancient India. They were highly attached to household works and very few women were encouraged to involve in conflicts.

As India moved from Ancient to Modern India, women were in every part of the society’s work. The women were encouraged hugely to work as men in society. In Present India, women are given high competition for men in job opportunities. The Present status of women in India is high and they were given high importance like reservation in every sector of India. But the crime towards women is at a high rate as compared to the previous centuries. In the middle of ancient and modern India, women had huge discrimination in society. But after many struggles by educating the people, women had achieved their human rights. In those days the status of women in India is less because women were suppressed. However finally in present India, women had an important status than men in people’s minds. Nowadays the families are happy to get a baby girl child in their family. All these status for women in India is by the government Women’s acts, Women’s campaigns, etc. Finally, the status of women in modern India is higher than in the ancient days of India.

Long Essay on Status of Women in India

As we start observing the women’s status from Past India, In the Vedas the women are described very beautifully due to their roles. As the days move on, the women have huge importance and treated them with respect. Women had the freedom in most of the kingdom to have their own life. They were allowed to do any work and help their families economically to fulfill their needs. Then the status of women in kings ruling India had good importance and also the improvement.

Women were suppressed in India during the Mughals ruling because the Mughals belong to the Muslim religion. The fact in the Muslim religion is women are not allowed to come into society to participate in any activities. During that time the women had huge discrimination and were treated as slaves attach to look after the family needs. Even now the Muslim countries like Iraq, Pakistan, Afghanistan had women’s discrimination and disrespect, etc because of the rules in the Muslim communities. But the discrimination did not go with the kings and their kingdoms, as a result, people were addicted to those rules and regulations.

Great and Positive people like Mahatma Gandhi, Swami Vivekananda, and some women like Sarojini Naidu, Rani Laxmi Bhai, and many more people fought against women’s discrimination in society. These fighters fought against society and women’s discrimination tradition and culture during and before independence. After observing all the scenarios about the women in society, the constitution of India is framed with the important status to the women. According to the constitution, the status of women is high and perfect to the freedom of women to move into society. After Independence, the women were encouraged to move into society as they’re needed to work anywhere.

As we see now the present days of women in India are in every sector parallelly balancing their family needs. Nowadays the women are working as Pilots, Politicians, Enterpreterneurs, Police, Doctors, IT employees, Business Architects, etc similarly to men. The status of women in India in the present day is higher than the importance of men in society. Women’s status can be observed by the reservation, special laws, women securing laws, Women development funds, etc. All these were exposed to know the status of women in India. Finally, the women’s status can be observed in India by great women like Indira Gandhi, Sarojini Naidu, Kiran Bedi, PT Usha, Pratibha Patil, and many more people are on the list.

The status of women will be always high in India and they were treated equally to men in modern society. This cannot explain easily due to the huge involvement of women in society after the independence of India. The special laws and the enforcement for the security needs of women also boost the status in India. Finally, the essays are concluded with a quote by Jawarhal Nehru ” status of women could determine a nation’s worth”.

Dear Students and Children, you can download the Status of Women in India Essay in the Hand Written Format by Clicking the Below Click Here Link.