This is the Short Essay on Sardar Vallabhbhai Patel. Sardar Vallabh Bhai Patel is commonly called Sardar Patel. Sardar Patel was born on October 31, 1875, in Nadiad, Gujarat. His parents are Jhaverbhai Patel and Ladba. He wanted to become a lawyer so he spent a long period away from his family. He borrowed the books from the lawyers and studied them. Patel practiced law and became the first chairman of “Edward Memorial High School”. In the year 1913, he was back in India and stood as one of the best barristers in India.

Sardar Patel won the election in Ahmedabad and he gave a speech to support Gandhi for Swaraj for independence. He was a great follower of Mahatma Gandhi and participated in many movements along with him. He followed Gandhiji’s ideologies for the fight against the British. He strongly opposed British rules against the Indian people. He served as the Secretary for Gujarat of the Indian National Congress. He took an active part in the Civil Disobedience Movement, Quit India Movement, Satyagraha, etc.

Patel served India as Deputy Prime Minister. He is one of the leaders who served India for some time from 1947-1950. He is called “Iron Man of India” and the statue of him is commemorated as the “Statue of Unity”. This great Iron man last breath was on December 15, 1930, with a heart attack in Bombay.

This is a Long Essay on Sardar Vallabhbhai Patel which explains their brief life history. Sardar Vallabh Bhai Patel was born on October 31, 1875, in Nadiad, Kheda district in Gujarat. he is commonly called “Sardar Patel”. The meaning of Sardar is “Cheif”. Sardar Patel was one among the six children of his parents Jhaverbhai Patel and Ladba. He belongs to a Leuva Patel Patidar community of Central Gujarat. His date of birth is not recorded officially and he entered in his matriculation as of October 31. Patel passed matriculation at the age of 22. He decided to study barrister, so he spent years together away from his family for his study. He borrowed the books from the other lawyers to study for passing his examination in two years. Patel practiced law and became the first chairman and the founder of “Edward Memorial High School”.

Patel’s wife Jhaverba was admitted to the hospital to undergo surgery for cancer but unfortunately due to the rash for the emergency surgery, she became weak and was died in the hospital in the year 1909. Patel was informed about the news by the letter, during that time he is conducting the cross-examination he did not even respond to the news, and later when he won the case he broke out. Later he moved to England and got enrolled at Middle Temple Inn in London. He completed his 36-month course in 30 months and became the top of his class. Later he returned to India as a barrister and settled in Ahemdabad.

Later he won the elections as the Sanitation Commissioner in the year 1917. In the same year, he met Gandhi, and his ideologies and hard work for the country inspired Patel, then he decided to join the freedom struggle. From then the journey Patel started in politics. Later he gave a speech at Borsad and encouraged the Indians to support Gandhi for Swaraj. Thereafter he became the Secretary of Gujarat Sabha of the Indian National Congress. Patel led a No Tax Campaign for the farmers to relieve them from taxation. Later on, he became successful in leading the campaign. He also gave his support to Gandhiji for Non-Cooperation Movement. He made his efforts on untouchability, caste discrimination, etc.

Sardar passed a resolution called “Fundamental Rights and Economic Policy” in 1931. Later he became the Senior leader of the Indian National Congress for his efforts for the Nation. He supported Gandhi and also participated in many movements that were led by him. He participated in the Civil Disobedience Movement, Non-Cooperation Movement, Quit India Movement, etc. He fought for the independence of India and made a mark in the history of India. Patel was appointed as the 49th President of the Indian National Congress. He fought for United India and released 565 princely states from the British by the Indian Independence Act in 1947. His freedom struggle for India made to be recognized as the “Iron Man of India”. Sardar Patel passed away on December 15, 1930, with a massive heart attack in Birla House in Bombay. 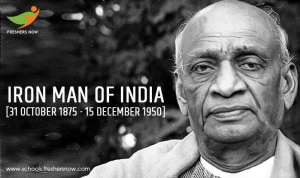 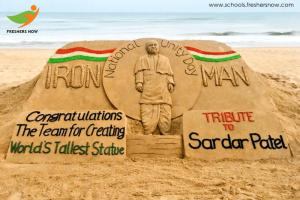 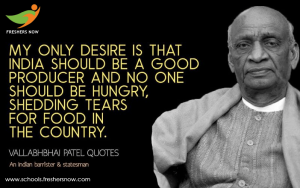 Conclusion: In the Conclusion of the Essay on Sardar Vallabh Bhai Patel, he is regarded as the “Iron Man of India” for his selfless service for India. He is a brave fighter and an Indian Barrister. He is a senior member of the Indian National Congress. He fought for the rights of Indians. He served as the Home Minister and the Deputy Prime Minister of India. Hence, he has remained in the hearts of the Indians for his struggle for Independence.

Dear Students and Children, you can download the Sardar Vallabhbhai Patel Essay in the Hand Written Format by Clicking the Below Click Here Link.