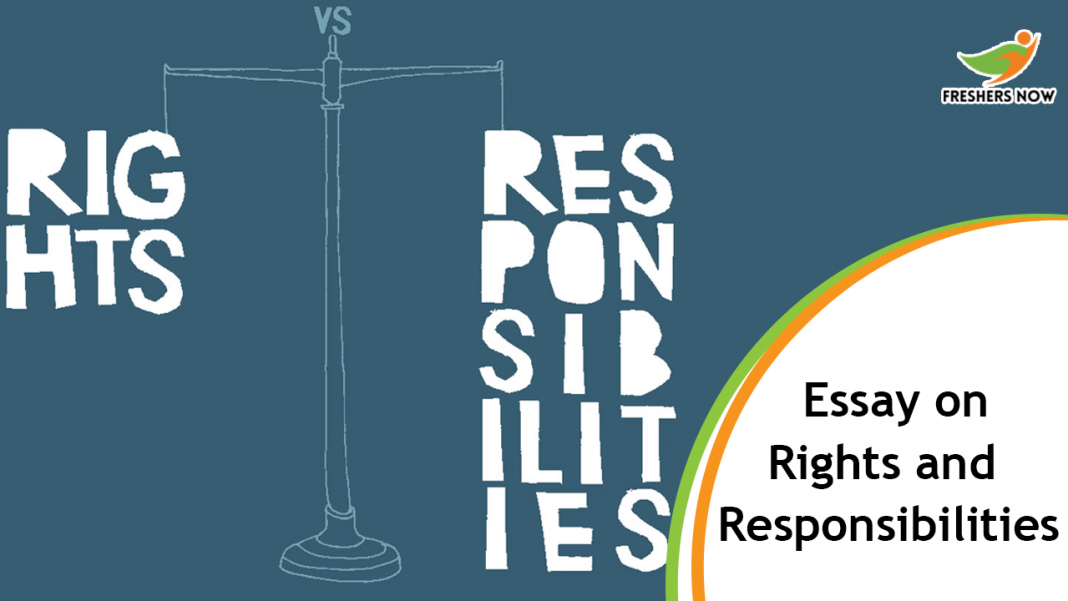 Herewith, We have provided an Essay on Rights and Responsibilities of Citizens for Students and Children, So not only the students and children but also everyone has to refer to this complete article because as a citizen of India we must have a complete awareness of our rights and responsibilities.

Essay on Rights and Responsibilities of Citizens

Citizen: A native member of a state or nation or a participatory member of a country. Citizenship is gained by a person by meeting the legal requirements of a nation, state, or local government. If the citizen meets the laws of the country then it is granted certain rights and privileges.

Rights and Responsibilities of a Citizen Essay: Every citizen of India are expected to perform some responsibilities, We must respect our National Flag and National Anthem by obeying the laws of the Country. The Fundamental Rights are considered as the basic rights of all citizens and it is embodied under Part 3 from Article 12 to 35 of the Indian constitution irrespective of caste, creed, color, gender, religion, etc., The six Rights of Indian Citizen depicted in the Indian Constitution were borrowed from the constitution of USA. Likewise, Indian citizens are also expected to perform some duties towards the country, Fundamental duties of  Indian citizens were added by the 42nd amendment under Article 51A, Part 4A of the Indian Constitution.

Six fundamental rights are granted to Citizens in India. They are Right to Equality,  Right to Freedom, Right against Exploitation, Right to freedom of Religion, Cultural and Educational Rights, and Right to Constitutional
Remedies.

1. Right to Equality (Article 14-18): All are equal before the law. Right to equality ensures, Equality before the law and equal protection of laws, and it prohibits discrimination on grounds of religion, race, caste, sex, or place of birth. It also ensures Equality of opportunity in matters of public employment and abolishes untouchability. There is no discrimination against anyone in matters of employment on the grounds of caste, creed, color, religion, gender, place of birth, etc.

3. Right against Exploitation (Article 23 and 24): Trafficking, child labor, forced labor are abolished under this right by making it an offense and punishable by law. It ensures Prohibition of employment of children in factories, etc.No child below the age of 14 years can be employed to work in any factory or mine or engaged in any other hazardous employment.

4. Right to Freedom of Religion (Article 25 to 28): Freedom of Religion grants religious freedom and ensures secular states in India. As per the Indian Constitution, there is no official religion in the state and states should treat all regions equally and impartially. It ensures freedom of conscience and free profession, practice and propagation of religion, freedom to manage religious affairs, Freedom from payment of taxes for promotion of any religion, Freedom from attending religious instruction or worship in certain educational institutions, and the state can not compel any citizen to pay any taxes for the promotion or maintenance of any particular religion or religious institutions.

5. Cultural and Educational Rights (Article 29 and 30): Cultural Rights ensures the protection of language, script, and culture of minorities, Where a religious community is in the minority, the constitution enables it to preserve its culture and religious interests. Educational rights ensure education for everyone irrespective of their caste, creed, color, religion, gender, place of birth, etc., and the minority community has the right to establish educational institutions of its choice and the state shall not discriminate against such educational institutions maintained by a minority community.

6. Right to Constitutional Remedies (Article 32): Article 32 ensures that every citizen can go to the supreme court to ask for the enforcement, protection, and violations of their fundamental rights. Supreme Court has been entitled with the powers to issue orders
against any person or Government within the territory of India for the enforcement of fundamental duties.

Fundamental Duties or Responsibilities of an Indian Citizen:

The following fundamental duties of the 42nd amendment under Article 51A,  Part 4A of the Indian Constitution must be obeyed by the Indian citizen

a) To abide by the Constitution and respect its ideals and institutions, the National Flag and the National Anthem.
b) To cherish and follow the noble ideals which inspired our national struggle for freedom.
c) To uphold and protect the sovereignty, unity, and integrity of India.
d) To defend the country and render national service when called upon to do so.
e) To promote harmony and the spirit of common brotherhood amongst all the people of India transcending religious, linguistic, and regional or sectional diversities; to renounce practices derogatory to the dignity of women.
f) To value and preserve the rich heritage of our composite culture.
g) To protect and improve the natural environment including forests, lakes, rivers, wildlife and to have compassion for living creatures.
h) To develop the scientific temper, humanism, and the spirit of inquiry and reform.
i) To safeguard public property and to abjure violence;
j) To strive towards excellence in all spheres of individual and collective activity so that the nation constantly rises to higher levels of endeavor and achievement.
k) Who is a parent or guardian, to provide opportunities for education to his child, or as the case may be, ward between the age of six to fourteen years. The duty was included in the list of fundamental duties by the 86th Amendment to the constitution of India in the year 2002. 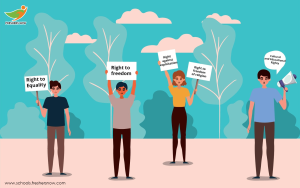 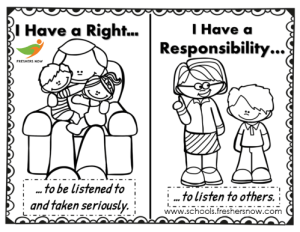 We hope that the above-composed Essay on the Rights and Responsibilities of Citizens for Students and Children in English will be useful for you.

Dear Students and Children, you can download the Rights and Responsibilities of Citizens Essay in the Hand Written Format by Clicking the Below Click Here Link.