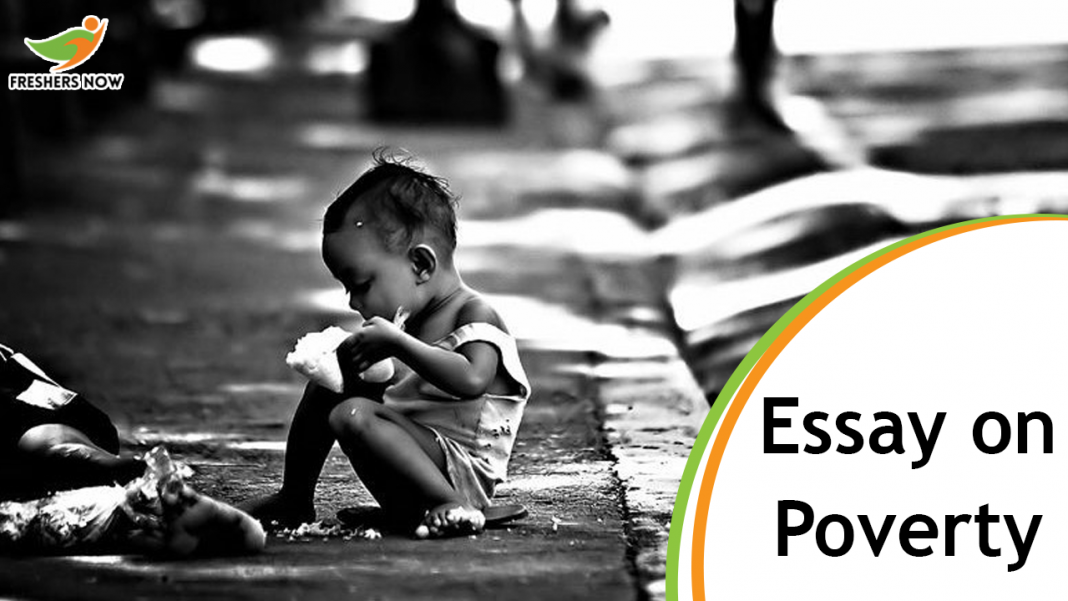 What is Poverty?. Poverty means being poor and unable to get basic needs like food, shelter, clothes, etc. Poverty can also lead to various things in society like unemployment, child labor, crimes, etc. Poverty is one of the challenges which needs to get an end to many countries. Similarly, the below essay on Poverty will give you great information and unique points about it. The below essay on the Poverty line in India will give the causes, results, and much other basic information about poverty in India. In further below of the article, the quotes on Poverty are included

Poverty is an unsolved issue and challenge for many countries all over the world. The poverty level is increasing year by year and throwing a challenge to Governments and all the people. Poverty depends on various factors like population, literacy rate, agricultural level, etc making the country to be poverty or rich. There are many countries which are in drought due to poverty in their country and a lot of people are getting into trouble with this issue. The poverty level of a country can be determined by all the people who are getting the food, shelter, proper clothing, literacy rate, etc.

In India, Poverty is very high which is making the country as still as a Developing country. The Government has brought out many laws to remove poverty in India and arranging all the needs to reach every individual in the country. In India, there is a large number of families who are living under the poverty line and running their families in the hungry world. There are more than 60% of families have only one meal for the whole day. The effects of poverty are it will increase the poor in the country, the literacy rate will be less, production will reduce, cost of food clothes and basic needs will increase. There is a chance of an increase in the Crime rate in poverty countries. The causes of poverty are population, less cultivation level, improper governance, people do not pay the correct taxes, a large amount of savings, low literacy rate, etc. Every person is should be responsible and work hard towards removing poverty.

Poverty means is poorness and economically low. It also refers to unable to get basic needs like food, shelter, clothes, nutrition, and many more. Poverty is a challenge to many countries that need to get solved for any improvement in the country. Why does poverty arise for countries?. Poverty occurs due to unemployment in the country and also rural people start migrating to urban areas for employment. Every person thinks about basic needs like food, shelter, clothing to get these things people started moving from one place to another. Cultivation has also had a role in poverty if the rate of cultivation is low then the cost of food will increase and it leads to economical depletion of the country.

In countries with a heavy population like India, poverty will always be the top onboard challenge for the Government. As the population increases day by day in India, people can’t able to get all the needs in their daily routine. In India there, more than 60% of the population live with one time meal for a day. The nutrition level for the child in India is less because of poverty in the country. Indian Government had bought many laws and rules to remove poverty in the country, but all these laws and bills had become just namesake in society. Poverty arises because of improper tax-paying, less literacy rate, depositing money in other countries by rich people, improper governance, huge population, high unemployment, etc. The government made laws for savings, investing, and many more to reduce the poverty rate in India.

An international poverty day is named the International Day for the Eradication of Poverty. The next international poverty day was fallen on 17 October 2021. There will be a theme for this day every year and it depends on the conditions of the world. The theme for 2020 international day for the Eradication of poverty is Acting together to achieve social and environmental justice for all – which is extremely pertinent in the era of COVID-19. Poverty can lead to many damages in the country like an increase in child labor, increases unemployment, an increase of crime scenes, etc. The poverty line has a role in the development of the country and democracy ruling for the country. Poverty is divided into six types depending on the various categories and situations. Absolute, Relative, Situational, Generational, Rural, Urban Poverties are the types that occur for long periods or short periods depending on the situations.

Poverty can mislead the country’s growth and much other development in the country. Poverty leads to Child labor, crime, affects education, hungriness, and many others. To remove poverty all people should start working and the government should make opportunities for the people and remove unemployment. Poverty can be removed by the education and literacy rate and chances for education in the country. Poverty means not just a lack of money, it is a lack of basic needs for people’s life routine. There is a great quote by Nobel prize winner Nelson Mandala is “Poverty is not natural, it is manmade” which means it is not permanent it can be solved. Poverty is completely dependent on the people’s work, mind, and governance of the country.

We believe that the above-provided essays on Poverty will help out in needed situations. The information given by the article will help you to gain some basic knowledge about poverty and democracy in India.

Essay on Poverty for Students and Children | PDF Download

Dear Students and Children, you can download the Poverty Essay in the Hand Written Format by Clicking the Below Click Here Link.