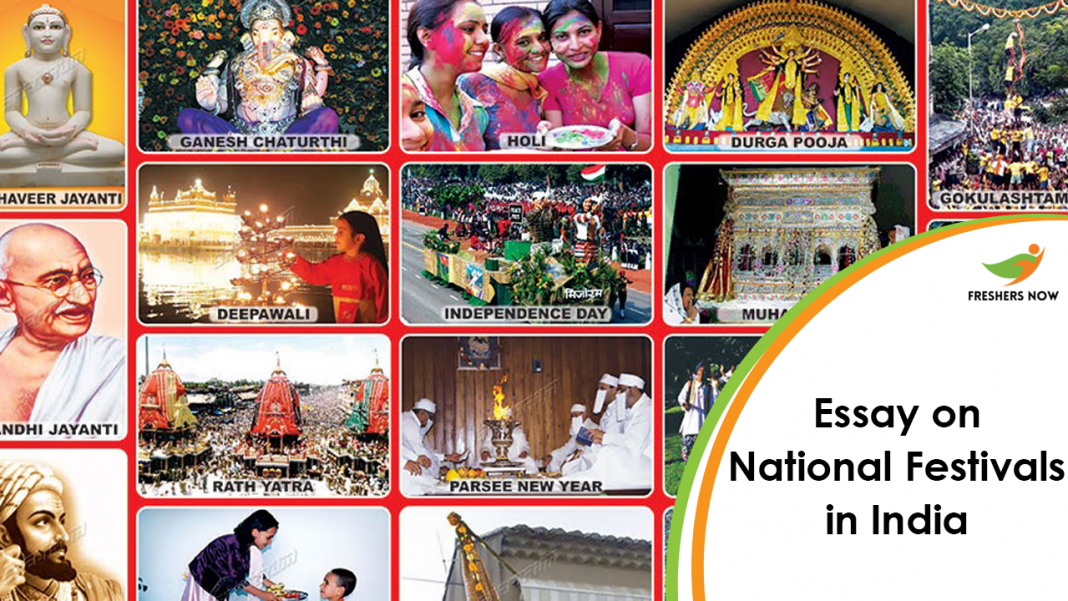 Essay On National Festivals in India: India is a country with unity in diversity. The country has people with diverse cultures and traditions. There are many festivals celebrated in India, irrespective of their morals and ethics. The Festival is all about
happiness, excitement, lively celebrations among the people. India is a residence for many festivals. The festivals are celebrated with huge splendor and delight all over India. There are several religious festivals in India. The inhabitants in India celebrate these festivals
according to their traditions and values, they are restricted and marked to a particular community.

National Festivals in India are celebrated by all the people in India along with people who are of Indian origin, but residing in other countries, for livelihood. Apart from their values and ethics, people all over the country celebrate National festivals. All the Indians proudly come as one to celebrate these festivals. The National Festivals of India are – Independence Day, Republic Day, and Gandhi Jayanti.

On the occasion of Independence Day, people show their patriotism towards the country by hoisting the National Flag, which is tricolored. The Prime Minister of India hoists the flag at the Red Fort in New Delhi. While the hoisting of the flag takes place, correspondingly the National Anthem of India is played. The Parade from the Armed Forces is performed. Every School, College, University, and government office and building hoist the Nation Flag. This day is declared as Nation Holiday in India.

India got its Independence on the 15th of August 1945. But the constitution of India was not adopted soon after we got Independence. As our Constitution was formed on the 26th of January in the year 1950, we celebrate this day as our Republic day. From there on every year we celebrate 26th January as our Republic Day. The President hoist the National flag, at the Rajpath in New Delhi. The National Anthem is sung by all the people. The Parade starts from the Rashtrapathi Bhavan to the Rajpath. The Republic day parade is an attraction on the occasion of this day. People enjoy the Parade by visiting the grounds of flag hoisting. Also, the bravery awards are presented on this day.

Gandhi Jayanti is celebrated on the 2nd of October. It is celebrated every year in the country. This day is the birthday of Mahatma Gandhi. He is the Father of the Nation, who sacrificed and had gone through many struggles for our country. Gandhiji, birth anniversary is celebrated on this day. He sacrificed many things to bring freedom to our country. He strived for peace and harmony in the country. The Prime Minister lays garland at his Raj Ghat. People also celebrate this National festival by singing patriotic songs in front of the statue and photos of Mahatma Gandhi. This day is also declared a holiday in India.

Conclusion: People in India celebrate this festival with great pride and patriotism. These festivals will bring all the people together as one. Celebration of these National Festivals will encourage future generations to have love and respect towards the country.

Dear Students and Children, you can download the National Festivals in India Essay in the Hand Written Format by Clicking the Below Click Here Link.