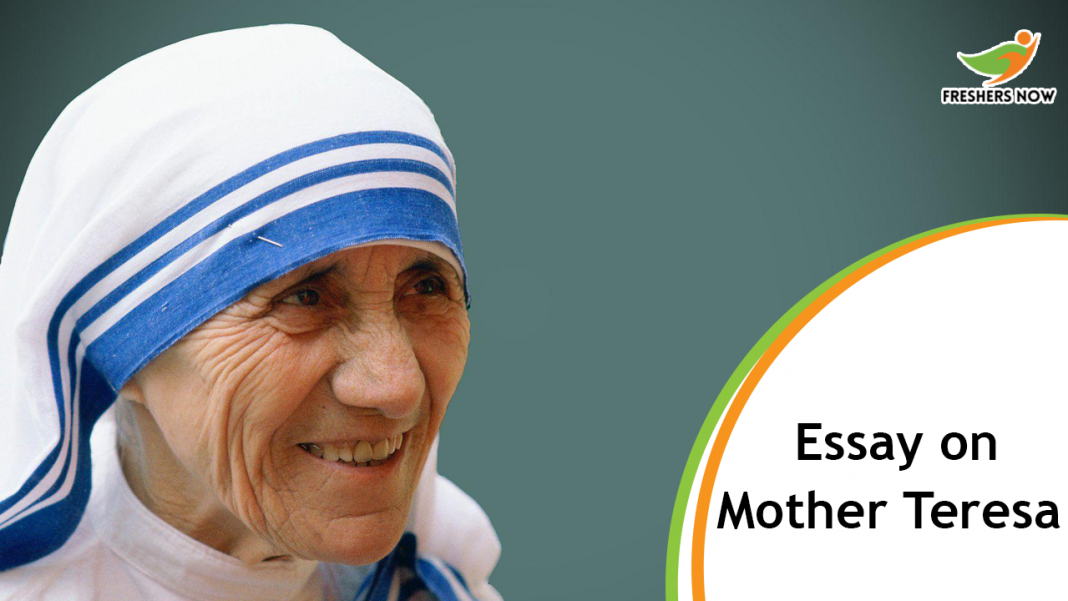 In this article, people will get to know about the Introduction to Essay on Mother Teresa. Mother Teresa was born on born on 26th August 1910 in Albania. She is a nun at the Catholic church at her birthplace. She is well-known for her services rendered for the sick, leprosy, HIV/AIDS, etc. She is one of the most inspirational and motivational people for many people in this world today.

Mother Teresa after getting citizenship in India made a move towards the Missionaries of Calcutta. She is very kind at heart and reached out to people with her simplicity. Her simple nature and sympathetic heart made her a legendary person in this nation. She served people for about 45 years and never looked back on her family or her personal life. She won many famous awards throughout her lifetime and she is a very remarkable personality in the hearts of people till today.

Here you get the Short Essay on Mother Teresa, a famous and popular icon of the Nation. Mother Teresa was born on 26 August 1910 in Albania. Mother Teresa a great humanist person is very simple by her word of mouth or by the action of her hand. Mother Teresa’s father was involved in Albanian politics and passed away in the year 1919, at the age of 8 to Mother Teresa. She was brought up by her mother and she was made to join in Roman Catholic. After attaining the age of 18 she left her mother and her sister and merged with the Missionaries of Loreto. From then on her journey for God and people started. She never turned back into her own life.

She reached Calcutta in 1928 and worked as a teacher in the school. Thereafter she changed her name to Teresa. She worked as a teacher for around twenty years and took a place as Headmistress. Although she was happy with her life in teaching and making people happy there is something that is banging her back to do something for the people. She is full of poverty and sickness around her. So she decided to serve people so for that reason she left the convent to serve people.

After the final decision, she started a missionary of her own in 1948 to serve the poor and needy people. Mother Teresa soon after gaining citizenship in India she worked for a few months in Patna to gain Medical training. Consequently, she moved to the slums in Calcutta to serve people who are in need. In this way, she made a drastic move in the world of helping and this continued till her last breath. She passed away on September 5, 1997.

In this Long Essay on Mother Teresa, you can understand her complete life of her. Mother Teresa a well-known person for her humanity was born on 26 August 1910 in Albania. She was brought by her mother and after a certain age, she joined Roman Catholic. Thereafter, she made a milestone in history and laid the foundation for the Missionary of Charity. To help the poor and the needy people. She is very attached to God and preached the words of God to the people where she served With her humble and polite nature, she attracted many people around her. She got recognition from many famous people for her nature. She received several awards like Padma Shri, Jawaharlal Nehru Award, Nobel Peace Award, Ramon Magsaysay Award for Peace and International Understanding, and the Pope John XXIII Peace Price (1971).

Mother Teresa was a role model for all the missionaries that are being run in different parts of the Nation and also in the Continents. She laid foundations for different charity centers for people of the sick, poor, hungry, homeless, etc. She was praised by all the people irrelevant to the age group. She has made many contributions to the world for the sake of people. It is her passion to serve the needy and the poor.

Mother Teresa experienced a Heart attack in Rome in 1983 while visiting Pope John Paul II. Thereafter, she had a second heart attack in 1989 and received an artificial pacemaker. Afterward, in 1991 she had pneumonia in Mexico and she also suffered from many health problems. She decided to resign to the Missionaries of Charity, but the nuns over there were refused her decision so she continues her post as ahead to the Missionaries of Charity.

After some days she left her last breath on September 5, 1997. By her death, many people from different parts of the nation have gathered to see her. This made the people get into a depressed world by her death. But, the services and the charity centers laid by her were still running by many nuns across the world. 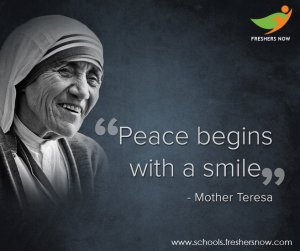 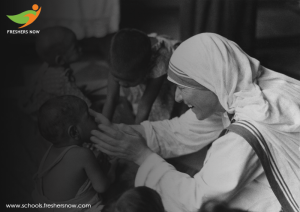 Conclusion: In the conclusion of the Essay on Mother Teresa, she is one of the famous personalities with a very big heart. Still today she was praised and worshipped by various people across the world. The education she provided to many children and the help she has given to many people who are in need make her alive in the hearts of many people.

Essay on Mother Teresa for Students and Children | PDF Download

Dear Students and Children, you can download the Mother Teresa Essay in the Hand Written Format by Clicking the Below Click Here Link.