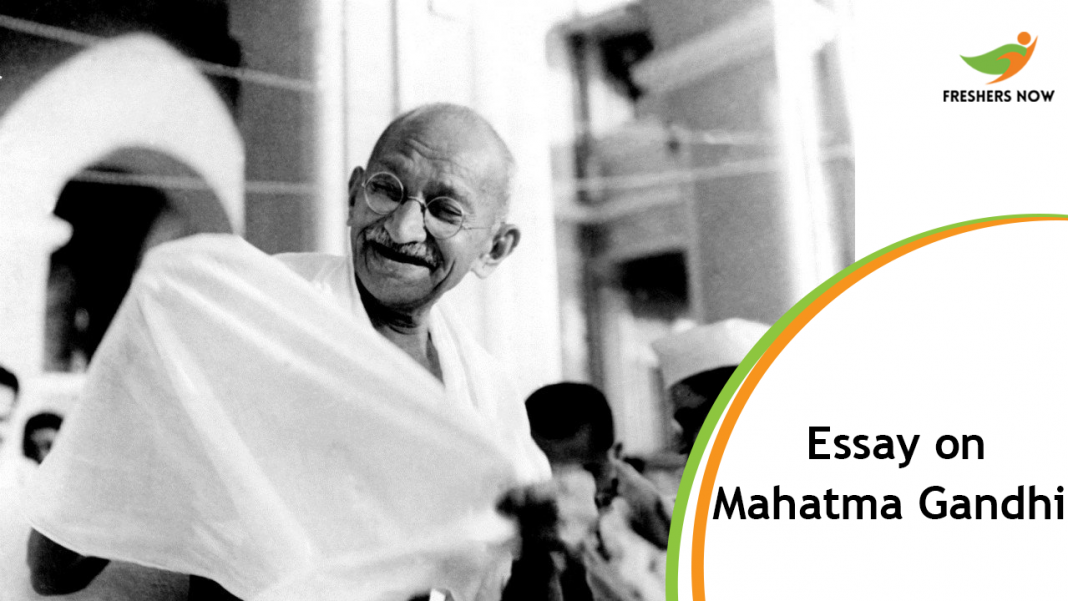 Essay on Mahatma Gandhi for Students and Children

Here we can see the Early life and Family on Essay on Mahatma Gandhi. Mahatma Gandhi known as Mohandas Karamchand Gandhi shortly called “Bapu” was a great Patriotic leader. Mahatma Gandhi was born on October 2nd, 1869, at Porbandar in Gujarat. On October 2nd it is celebrated as Gandhiji Jayanthi on the occasion of Gandhiji’s birthday. Talking about the family of Gandhi, Father Karamchand was a Chief Minister and Mother Putlibhai is a simple person with a kind heart. Gandhiji was the youngest child in the house. Mahatma Gandhi was brought up in a Vaishnavism family in which they strongly believe in God Vishnu. Gandhiji got married at the age of 14 to Kasturba at a very young according to the culture of their family. Gandhiji’s couple had four children namely Harilal, Manilal, Ramdas, Devadas.

Here Short Essay on Mahatma Gandhi Education is briefly known. Gandhiji went to school at the age of 9 and he felt very shy at school. Basically, he is an introverted person during his schooling. He did his schooling in Rajkot and learned the basics of Geography, History, and other languages. After he was moved to high school at the age of 11, and he got married due to his marriage his studies were disturbed. He lost his one year at his high school. Later on, he completed his studies at high school without any difficulties. He was placed in Samaldas college in Bhavnagar in 1888 in Gujarat for the completion of his degree and it is the only college that is offering a degree.

On the other hand, while doing his degree he was not satisfied with his studies. Later on, he was interested to do Law in London. So for this reason he convinced his mother and his wife and made a promise that he will not touch wine, women, and non-veg. Thereafter he joined University College, London for his law. He completed his three years of law successfully. But the shyness and introverted personality made him standstill. So to overcome this, he joined in public speaking practice and this helped for practicing law.

Religious Beliefs | Essay on Mahatma Gandhi for Students and Children

Basically, Gandhi was brought up in a family where they worship God Vishnu and follow Jainism. After he had moved to London for his Law for a period of three years he continued the same worship as of his family. Once after completing his law he joined in Vegetarian Society in which some of his friends made him know about Bhagavath Gita and this left an impression on his total life.

After pursuing his Law in London, Gandhiji decided to work as a Lawyer in South Africa. For the first time, Gandhiji faced racial discrimination during his journey and he was thrown out of the first-class compartment due to a reservation for the compartment. This was the first incident that he came across and this had a very strong effect on his life. Later on, he came to know these types of incidents were quite common on black-colored skin people.

As a freedom fighter Mahatma Gandhi faced many problems in his life. Mahatma Gandhi was called the Father of the Nation. He is very famous as a freedom fighter till now. Mahatma Gandhi used to follow two major ideals in his life which are the Truth and Non- Violence. He was a great freedom fighter and lead many movements in a single hand. He fought against many issues that need to be changed. He gave his own best in all the movements that he made at that time. He revolted upon the British rule upon caste, discrimination of Indians, rights to vote, etc. These movements held by Gandhi made South Africans feel a great revolution and the Indians in South Africa made him swing into politics. From there on Gandhiji entered into several movements for the sake of people and to bring equality.

Mahatma Gandhi – Movements for Independence the struggles that are made by Gandhi are well known. Gandhiji joined the Indian National Congress in the year 1920 and he took leadership in the same party. He made an admirable remark in the history of India, his strategies were Truth and Non-violence made many people attract to Gandhi. The movements which he made has a strong impact and this lead to the quit of the British from India. The below are some of the movements Gandhiji made for the freedom of India.

Gandhiji played a prominent role in World War-I. The Viceroy invited Gandhi to War Conference in Delhi. He agreed to the proposal and gathered people to move towards the army for the war. Gandhi wrote to Viceroy that they “personally will not kill or injure anybody, friend or foe.”

Champaran Satyagraha is a great revoluted movement for the Civil Disobedience and Injustice done to the Indians. This movement made people speak out about the injustice made to them. Indians are now able to raise their voice that is being done for a long period. The movement made people turn against the injustice made to them in every matter of their life. This movement was mainly for the tenant farmers who are forced to grow indigo in their farming land and those people raised a strong voice upon the British rule for their injustice and forcible nature.

Kheda Satyagraha Movement was mainly done for the farmers who are levied with heavy taxes in the Kheda district in Gujarat. This movement made people of that district raise voice upon the Britishers for their injustice made to them. The people in Gujarat turned against British rule at a high level. By this movement, the Government called for Tax-off for the farmers. For this movement, Gandhiji was supported by many famous freedom fighters.

The movement mainly focused on Muslims on the removal of their leader Caliph. The movement went on with a great response from the people of mixed religions. Through this movement, Gandhi became a famous leader all over the Nation.

This movement made people boycott British rule on them. The people revolted against the titles of the British people. The people raised slogans about the Swaraj. This movement leads to a massive rise in the voice of the people.

It is said to be one of the famous movements made by Gandhi during the freedom struggle. The Civil disobedience movement or the Dandi March is the same that lead a massive range of people to raise their voice against the salt law and for this, the people marched for nearly 25 days about 240 miles. During this movement, Gandhi was still encouraging people with his speeches.

Here in the conclusion of the Essay on Mahatma Gandhi understand the greatness of his struggles for the Nation. The challenges and the obstacles he faced made the nation stand uniquely on one stand. Hence, Gandhiji is one of the famous icons among all the freedom fighters.

For more updates on Education and for more essays on famous freedom fighters stay tuned to our website Freshers Now.