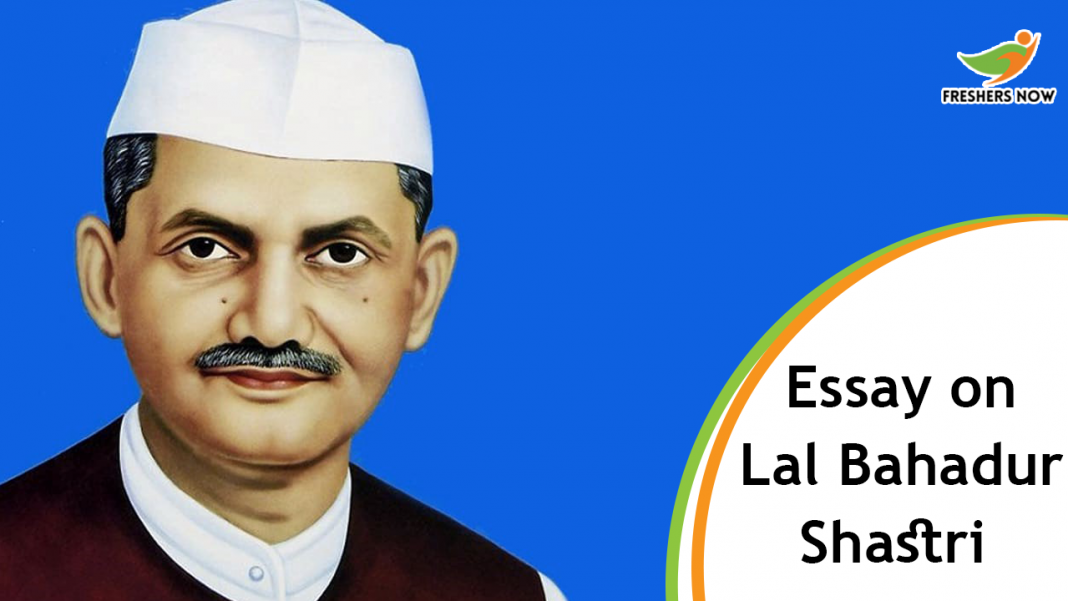 This is the Short Introduction to the Essay on Lal Bahadur Shastri. Lal Bahadur Shastri was a famous Indian freedom fighter. He is recognized by the people of India for his struggle for the country. He served as second Prime Minister and became a cause for the Green Revolution and White Revolution. He fought for the increase in food productivity by the food grains. He fought for the independence of India against British rule. Shastri is one of the great Indian politicians.

This is the Short Essay on Lal Bahadur Shastri which is helpful for children. Lal Bahadur Shastri was born on October 2, 1904. Shastri’s parents are father Sharda Prasad and mother Ramdulari Devi. His father died at a very young age. He has joined East Central Railway Inter College and studied up to 6th standard and later he was joined Harish Chandra High School, Varanasi for his remaining education. Somehow, he completed his graduation in first-class from Kashi Vidyapeeth. After a certain period, he married Lalita Devi and had six children. Later on, he joined as a volunteer in Congress Party and was jailed for his activities and he was released as he is a minor.

In 1928, he became a member of the Indian National Congress by Mahatma Gandhi. The life of Shastri changed by the entrance into politics. Shastri was appointed as Parliamentary Secretary in Uttar Pradesh. He is appointed as General Secretary for the Indian National Congress under Jawaharlal Nehru as Prime Minister. After the demise of Jawaharlal Nehru, he is the second Prime Minister of the country. Under his rule, he has taken many new steps towards the development of the country. He formulated many policies for development. His slogan is “Jai Jawan Jai Kisan” (Hail the Soldier, Hail the Farmer) for the increase in the production of the food grains and he became the cause for Green Revolution. His last breath was on January 11, 1966, in Tashkent, Uzbekistan.

Here is the Long Essay on Lal Bahadur Shastri, a brief history of life. Lal Bahadur Shastri is a great Indian politician born on October 2, 1904, at Mughalsarai in Uttar Pradesh. He belongs to the Kayastha Hindu Family. Shastri’s father Sharada Prasad Srivastava is a school teacher and his mother Ramdulari Devi is a headmaster and also an English teacher in the railway school in Mughalsarai. When Shastri is one year old his father died due to the plague. After the demise of his husband, Ramdulari Devi shifted to his father’s house and settled.

The education of Shastri took place at East Central Railway Inter College up to the sixth standard in Mughalsarai later his family shifted to Varanasi. The remaining education was completed in Varanasi at Harish Chandra High School. At his schooling, he was inspired by one of the teachers, developed a great patriotic feeling, and studied the history of India. In 1921, when Shastri is in his tenth standard he attended the meeting of Gandhi. After attending the meeting he decided to join as a volunteer in the National Party for the freedom struggle and was jailed at a very young age.

At the requirement of education for the post of volunteer, he continued his studies. He completed his graduation with a first-class degree in Kashi Vidyapith in the year 1925. The title given to him by Vidyapith college is “Shastri” which means scholar. Soon after the completion of his graduation he enrolled himself in Servants of the People Society, later became the President of the Society for the works he did for the progress of Harijans.

From 1928, he became an active member of the Indian National Congress and was jailed. On the release, he worked for Parliamentary Board as Organising Secretary at his home place in 1937. Soon after the Independence of India, he served as Parliamentary Secretary, and Minister of Police and Transport. With the power of the Minister of Police, he recommended the police staff to use the water jets. As Minister of Transport, he appointed women conductors for the first time in the history of India.

In 1951, Shastri became General Secretary for All-India National Congress and took the responsibilities of the elections. Later with the death of Jawaharlal Nehru the Prime Minister. Shastri is appointed as Prime Minister on June 11, 1964. After the charge as Prime Minister, he continued the policies of late Jawaharlal Nehru. He promoted the Green revolution which mainly focused on the increase in the food grains for the high-yielding of wheat, rice, etc. He also promoted the White Revolution which focused on an increase in milk productivity by supporting Anand Milk Union Limited ( Amul) in Gujarat.

Lal Bahadur Shastri’s slogan is “Jai Jawan! Jai Kisan!!” which is still in the hearts of the people especially farmers of the country. Shastri led a movement in 1965 in the Indo-Pak war and this came to an end in the year 1965 on September, 23. Shastri died on January 11, 1966, in Tashkent, Uzbekistan. His death became a mystery and there are no proper records for the reason for his death. Shastri’s wife confided that he was poisoned. Even after a long time of investigation on his death, there is no clarity. 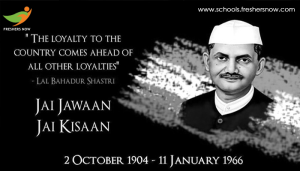 Conclusion: In the Conclusion of the Essay on Lal Bahadur Shastri, He is regarded as one of the greatest people for his service towards the country. Shastri is a great Indian politician with all the qualities of leadership. The one only person who is determined as the revolutionists for the increase in food production. Hence, Lal Bahadur Shastri is an icon for today’s politicians.

Dear Students and Children, you can download the Lal Bahadur Shastri Essay in the Hand Written Format by Clicking the Below Click Here Link.