Pandit Jawaharlal Nehru is the First Prime Minister of India. Jawaharlal Nehru was a great achiever in all the activities which he did for the struggle for Independence. Nehru was famous for children and they called him “Chacha Nehru”. He is a lovable person by all age groups people, especially by the children. Nehru is a great and famous personality with his strengths. Nehru is admired by many people all over the country. His love for the people of the country made him more popular by his nature. Most remarkable person in Indian History for his hardworking nature and the ruling of India as a Prime Minister.

Here is the Short Essay on Jawaharlal Nehru in brief. Pandit Jawaharlal Nehru was born on November 14, 1889, at Allahabad. His father Moti Lal Nehru is a barrister, mother Swarup Rani Thussu belongs to a Kashmiri Brahmin family and settled in Lahore. Pandit Nehru is commonly called “Chacha Nehru” by children. Nehru got his primary studies at home from the tutors, then he went to England for obtaining his higher studies at the age of 15. After he returned to India and made his legal practice. He got married in the year 1916. Thereafter, Nehru showed an interest in politics and is very much eager to set India free from the British. So, he moved to the Indian National Congress and participated in the movements that are led by Mahatma Gandhi.

Later he became the President of the Indian National Congress by attending all the sessions in the committee. He became the most eminent leader and struggled a lot for independence. Nehru observed that Indians are facing a lot of problems by British rule and started to protest against the British for their discrimination is part of the movements that took place for the freedom of India. He is imprisoned several times for taking part in the movements. Nehru thought to set Indians free from the British. He strived hard for the
Independence with his dedication and hard work for the country. Nehru is a very good author and as well writer he wrote many books which are famous till today.

Finally, at last, after all the struggles and defeating all the hurdles, India got Independence on August 15, 1947. India elected Pandit Jawaharlal Nehru as the First Prime Minister of India. It is said to be one of the famous achievements in the life of Nehru. Later on, Nehru was admired by the people for the best and right decisions for the country. He served India in his righteous way and got much admiration from various great leaders. Pandit Jawaharlal Nehru also played a prominent role in India’s Foreign Policy. Nehru left this world in 1964 leaving a great impact on the nation for his no more existence.

This is the Long Essay on Jawaharlal Nehru in a detailed explanation about his life. Pandit Jawaharlal Nehru was born on November 14, 1889, at Allahabad. His birthday is celebrated as Children’s Day all over the country. Nehru is popularly called Chacha Nehru by children. He is the eldest son to his parents Moti Lal Nehru and Swarup Rani Thussu. His father is a barrister and served as a President for Indian National Congress, mother was a pious person who settled in Lahore.

Nehru after attaining a certain age he got his primary education at his home by tutors. Later on, he moved for his higher studies to England in 1905. He went to Trinity College, Cambridge in the year 1907 and completed his degree in the year 1910. After he worked as an advocate in Allahabad High Court. As he was working as an advocate that did not give any satisfaction to him. He is interested in National Politics. As and when is a student in Britain he developed an interest in Indian politics. Jawaharlal Nehru is a famous author and as well as writer. He wrote many books like ‘Glimpses of the World History’, ‘Discovery of India’ and his autobiography ’Toward Freedom’ and he wrote many letters to his daughters and all of those letters were published as a book.

From then the journey of Nehru started in politics, he attended the annual sessions of the Indian National Congress. He came across a great leader called Mahatma Gandhi and realized the importance of the Nation and worked along with Gandhi in movements. Thereafter Nehru was elected as the President of the Indian National Congress for nearly four years and rendered his services to congress. He participated in the Indian Civil Rights Movement which was led by Gandhi. When at the time of World War-I Nehru had mixed feelings about the war. Nehru volunteered for the St. John Ambulance and worked for the organization as provincial secretary. Nehru questioned the censorship acts that are passed by the British Government.

Jawaharlal Nehru took part in Non-Cooperation Movement in 1920 and it was his first movement that made him reflect on the world. He was arrested for the movement and it took months for him to see the world. Later on, he again joined the movement and fought for independence along with other famous freedom fighters. An International outlook for
Indian Independence struggle is designed by Nehru. Nehru had a friendly nature for all his fellow beings. He had a close relationship with the freedom fighters to fight uniquely for freedom. He worked with Subhash Chandra Bose but he was separated from Indian National Congress. Nehru is the one among all the members in the Congress who raised a voice to break out all the ties with the British Government. Later on, Nehru hoisted the flag on the river of Ravi in Lahore and read out the pledge of the country. This is how the Indian flag is hoisted by the Indian National Congress for the first time.

Nehru formulated the policies for the future. The policies are national unity, parliamentary democracy, industrialization, socialism, development of the scientific temper, and non-alignment these all policies led to the Fundamental Rights for the people of India. The new constitution was formed by Jawaharlal Nehru. Nehru remained the iconic leader after the death of Sardar Valla Bhai Patel. Jawarharlal Nehru served as Prime Minister for around 18 years. Under his ruling, the policies are correctly implemented by him. So for that reason, he is elected as Prime Minister for several years. After the Independence, he was the only leader who remained for many years as a Prime Minister.

There are assassination attempts on Jawaharlal Nehru. Firstly, the attempt was made during the partition of India in 1947. The second attempt was made by a knife-wielding rickshaw-puller in Nagpur in 1955. The third attempt is done in Bombay in 1956. The fourth attempt was failed bombing attempts on train tracks in 1961. Nehru’s health is declining steadily and he is in a restful state and spent months together in Kashmir (birthplace). After returning from Dehradun he went to bed and that day he had a sleep-less night. In the morning after the return from the bathroom, he fell unconscious and he was dead. His death is announced in Lok Sabha on the same day and his body is wrapped by the tricolor flag of India. “Raghupati Raghava Rajaram” song was chanted at the platform for the public view. Lal Bahadur Shastri succeeded as Prime Minister after the demise of Pandit Jawaharlal Nehru. 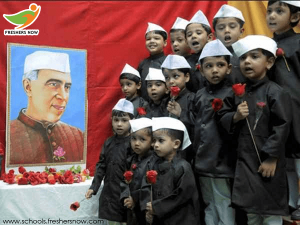 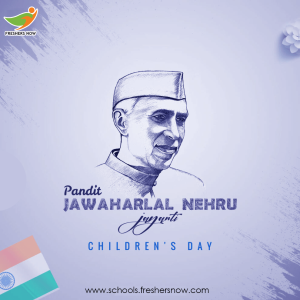 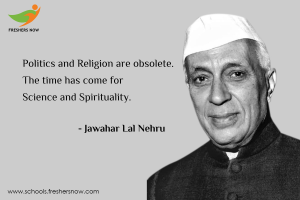 Conclusion: In this essay on Jawaharlal Nehru, he is one of the dynamic leaders who brought a drastic change in India. He struggled a lot for the Independence of India and later served India with his policies. These policies made India unique in all aspects irrespective of caste, creed, religion. Nehru is the most lovable person by all the people in the country, especially children. The government declared Children’s Day on the birthday of Pandit Nehru.

Essay on Jawaharlal Nehru for Students and Children | PDF Download

Dear Students and Children, you can download the Jawaharlal Nehru Essay in the Hand Written Format by Clicking the Below Click Here Link.