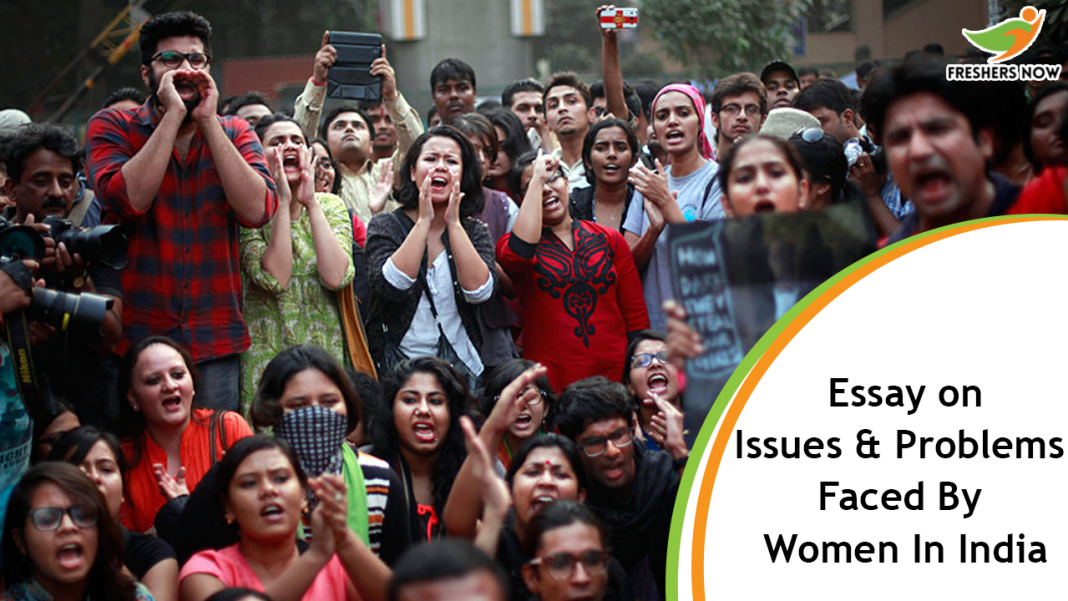 Women had a large number of issues and problems in India. In India, 48% of the population of India are women according to the 2011 census. As the country is one of the populated countries similarly women are also in large numbers. The security and problems faced by the women will be at a high rate and it will be always a challenge for the country. As because of the above points, the below essay on the Issues and Problems faced by Women in India has included all the key points. The below essays were included with unique information about women’s issues and problems in India.

Short Essay on Issues and problems faced by women in India

In India, women were worshipped as goddesses and given huge respect for the women. As from the past of India, women had discrimination in various scenarios in multiple ways. The women were discriminated against from ancient India not to move from the house. Because the women were attached to household works and not involved with society. The women had discrimination activities like the sati system, child marriage, the prohibition of widows into society. Issues and problems are continued towards the women as there are no constitutional laws for women in Ancient India. All these practices made society see women as short to play. These are the issues and problems faced by women in Ancient India, all these are due to women can’t speak against society.

As the past resulted due to various reasons but even today a lot of issues and problems continue towards women. There a large number of people fought against women’s freedom in society, finally, the women achieved the freedom to move into society. As the women were moving into society there are a large number of problems and issues increased towards women by the men. The problems and issues like harassment, rapes, abuse, domination, domestic violence, acid attacks, dowry issues, and many more. All these problems with women were because society made it a tradition that women shouldn’t talk against and didn’t allowed to involve. The government of India brought out many laws to keep an end to the issues and problems towards women in India. Women harassment acts, dowry acts, women security acts like the nirbhaya act, and many more welfares for the women. However, the problems and issues faced by women in India are always a pulse plot.

Large Essay on Issues and Problems faced by women in India

India achieved to reach the mars but did not achieve the solution for issues and problems faced by women in the country. In the present days of India, women had problems and issues with their security and importance in society. The crime rate towards women is high and still increases day by day in various ways. Women were abused in society endlessly from the ancient period and made it a tradition. One of the problems and issues for women is facing society and its matters. In the life of the women, there were many problems with their health at several stages. The addition of social problems will be an extra burden on women’s life.

Women are the ones who should satisfy all the people around them according to their needs. However, women are the ones who have more patience to achieve the satisfaction level of the people. Initially, the problem of the women is to get birth by their mother because the women are foeticide if they know the baby in the womb is a girl. From there the initial problem and issues start. As India is a country with families, who needs the boy child who will look after and extend the generation. At this point, the women started getting discrimination from their childhood.

However, the women were born with many problems then the discrimination and security problems will start towards women. The women in India will always have issues and problems at every stage of life. In India, the major problems are with the security of women. The women were treated low than men because of various issues like defending, physical strength, and many more. All these were built up for the women as a tradition but people also followed them without opposing.

Before the Independence of India, there are no laws for women, the men will take all decisions about the women at a certain level of society. But after the independence in India, women achieved special importance and many special powers. The women had reservations in every sector of society but they didn’t get their problems to end in daily life.

The problems and Issues of women lead to death in the middle of their lives. All the problems and issues towards women cannot be showcased to society because of narrow thinking. If the problem happened to women was known by society then the people start discriminating against them. By this, the woman cannot even speak out about her problem and proceed in the legal way to get her rights back.

Problems and issues faced by women in India are dowries, domestic violence, rapes, foeticide, acid attacks, discrimination, and many more. All these problems need an end, the government of India bought out acts and amendments for the security of women. These laws will result in a huge punishment for people who had done against the laws and illegal ways towards women. If a person does any illegal activities like acid attacks, rapes, domestic violence there are acts like the nirbhaya act to help out the women of India. The other major problem faced by women in India is Sexual offense because people think women are made for sex. This is the worst issue for women and also for the fame of the country.

Conclusion: To get rid of the problems and issues faced by women in India is to strictly apply the laws to the people. The government should motivate the people by campaigns, motivation posters, no dowery camps, and many more. Main important point is to allow women to freely express their problems to society. Every man should be educated from childhood that women are not for only physical help, they are also equal and should be secure. A lot number of solutions can be bought out only if the mind of society changes. Don’t tell your daughter to be within her limits, tell your son to behave properly.

We believe that the above essays on Problems and issues faced by women in India had bought out how the life of women in society. These essays will help the students for exams, competitions and also for the motivation of the people.

Dear Students and Children, you can download the Issues and Problems faced by Women Essay in the Hand Written Format by Clicking the Below Click Here Link.