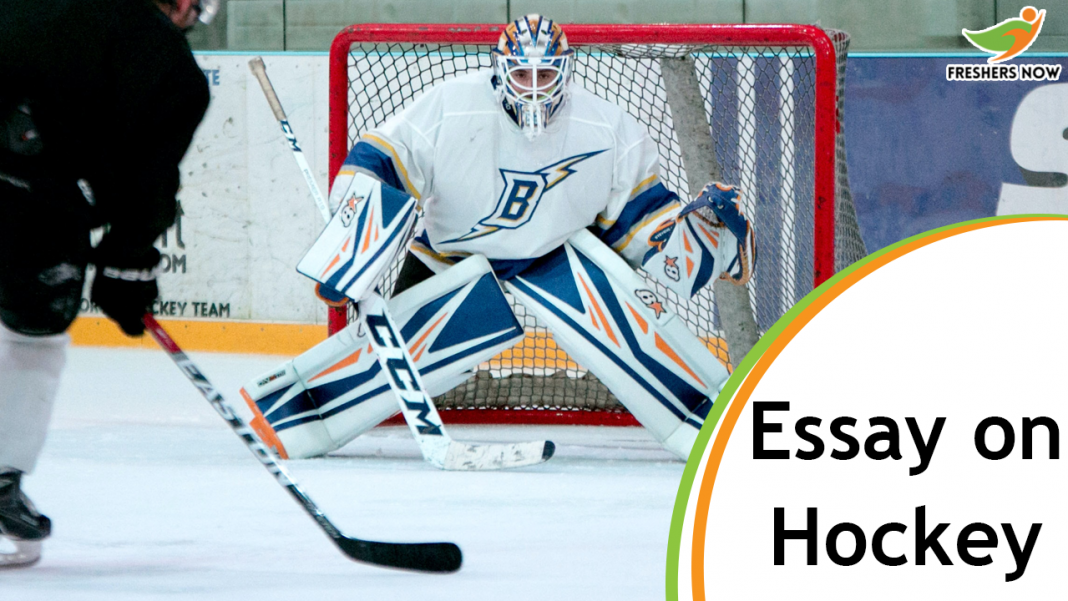 In this article, we are providing an essay on the Hockey game for students and children, the History of Hockey, Quotes, and Images. Students can go through this page for more information on Hockey games.

Hockey is a type of sport in which players try to get points by hitting a ball into the other team’s goal with a stick. Others believe hockey came from the French word “hoquet” which means shepherd’s stick. James Creighton, an engineer who learned how to play the game of hockey while living in Nova Scotia, is credited for bringing the game to a new level. He taught his friends at McGill University in Montreal how to play the game.

Hockey is a widely played team sport in our country. It is played on grass, artificial or watered turf, or synthetic fields. Each team has ten players and a goalkeeper. Hockey is a sport that requires a lot of practice and dedication.

Hockey is usually played on a rectangular field, and it is an outdoor as well as an indoor sport. The goalkeeper wears a heavily padded jersey and helmet and stands in front of the goal post with a curved hockey stick.

This is a fast-paced game that is played between the two teams. There are 11-11 players in both teams. The goal of all the players is to hit the ball on the other side of the net to get more points.

Hockey is a very famous sport and is known as the National Games of India. Hockey has not been officially declared as a national sport. However, it is considered to be the only national game of India, because India has won many gold medals in hockey.

For the first time, it was played with different methods, however, it is now played as field hockey, which developed in the British Isles in the 19th century. Hockey has many state levels and national levels competitions in schools and colleges.

The Indian women’s national field hockey team is ranked 9th in field hockey rankings (FIH) and is nicknamed “Nabhvarna”. In 2002 India won the gold medal in the Commonwealth games led by captain Suraj Lata Devi. In 2003 India won the Asian Cup at Kula Lampur. India stands in 5th position in FIH world rankings as of January 2019.

At last, We hope that the provided short and long essay on Hockey for students and children helps students to prepare for an essay writing competition.

Essay on Hockey for Students and Children | PDF Download

Dear Students and Children, you can download the Hockey Essay in the Hand Written Format by Clicking the Below Click Here Link.