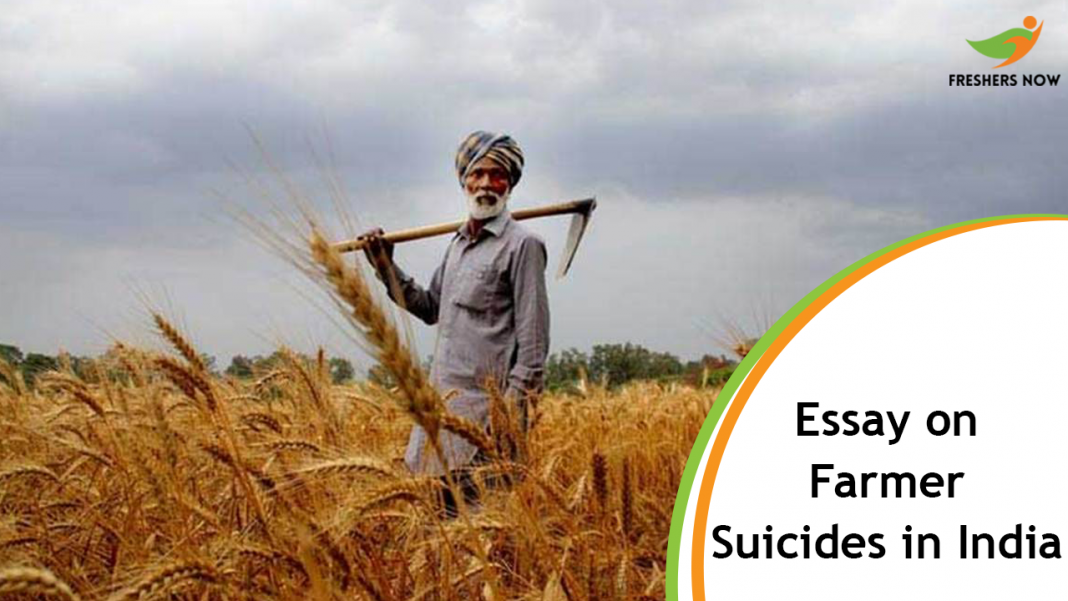 Farmer Suicides in India contain various reasons and the main reason is the drought in India. India is known as the land of species and cultivates any type of crop for the need of people. As India is one of the populated countries similarly the need for food is also high. 60.45% of the Indian land is used for cultivation according to 2016 data by the World Bank collection of development indicators. As there are huge land and a lot of farmers were involved in cultivation. Many climatic changes appear in India and these lead to Farmer suicides. Similarly, the below essay on Farmer Suicides in India contains all the reasons behind it. The below essay on the causes of Farmer Suicided in India is listed to know the tough conditions of the farmer and their families.

Farmers are the backbone of the country’s development where food is an essential need in human life. A world can run without machines, technology, robots, development, etc but not with food cultivation. Cultivation of land is the only profession of farmers which is a difficult task and depends only on the environmental conditions. Farmers are the only people who do not get enough respect from the people even the work is hard. In Modern India, as technology changes the people are attached to technological work and no person is interested in farming or cultivation. Thus makes respect for farmers gets decreases day by day. The farmers are the real hard workers who fight with the environmental condition to produce food for the people. In the world, Farmers are the only one who thinks about the other needs and development of the country.

Several reasons are hidden behind the Farmer suicides in India. One of the main reasons is drought which depends on climatic conditions. Farmers cannot get enough water for cultivation due to the occupation of land from lakes, ponds, and many other water resources. All these make the farmers depend on rains. The other reason is the cost for the cultivation, the reason behind this was that if all the farmers cultivate the same crop then the quantity of product is more, and the price of crop decreases. For this, the government is the reason to help the farmer to cultivate according to demand. And some reasons like High rainfalls, floods, economical needs of families, duplicate seed in cultivation, and many more reasons. Finally in India, to stop the Farmer’s Suicides the technology in farming should increase and bring up the techniques and many more. No individual or the government cannot handle natural conditions.

India is one of the countries that depend more on the farmers for the need for food and cultivation of lands. However, 60.5% of the land is being cultivated in India every year which means a large number of villages and people are involved in the farming sector. Even a large number of people are in farming, but the governments of India is failed to bring the laws for the farmers. Cultivating the land is the only occupation for the farmer, which is a difficult task and works for a long period. Cultivation is purely dependent on natural resources and atmospheric conditions. India is bounded with water in 3 out of 4 sides of the country which resultant in floods, cyclones, heavy rainfalls all these occur in sudden. As the cultivation of a plant is a long time process we cannot harvest the crops before themselves in name of rains and other natural disasters.

In India, there is a high rate of Farmer suicides every year and its rate is increasing year by year. Every government before coming to power gives high promises for the farmers but the scenarios change when anyone once they come into power. All the manufacturers have the power to decide the rate for their product but not for the farmers. In this way, the farmer cannot get the amount for their product which in results economic problems for their families. Economic problems force the farmers to suicide rather than fight against it.

The people of India believe that farming is a simple task and people will not give enough respect to them also for their profession. Farmers are the great and hard works of the world they just think about the ways to full fill the hungriness in the country. Without farmers, we cannot eat the food and cannot get it and our hungriness will never comes to end. The causes of Farmer suicides are natural calamities, atmospheric changes, scarcity of water, false seeds, the rate for the product, a large amount of cultivation of a single product, and many more reasons. Some of the reasons cause with nature cannot stop by mankind but some of the causes like rate, more cultivation and some other can change the decision of farmers.

Nearly 10,300 people who belong to the farming sector are committed suicide in India according to 2018 data. The count of deaths is increasing year by year due to the tough situations for the farmers. A farmer is a strong person who cannot easily commit suicide but the situations and conditions result in him committing. At some point, the government is also responsible for the farmer’s death. due to less guidance, and not giving them information about what to cultivate in demand and to make it profitable. Because of this farmers keep cultivating the same crops. More availability of crops leads to depletion of rate for the product.

The lack of technology and techniques in farming resulted in the farmers to death. This is the drawback for the country’s development in the farming sector. The government should bring out farming policies and educate the farmer about farming techniques. The government should do farming campaigns, awareness camps, farming posters and many more can stop the suicides of the farmers in India.

The Farmers Suicides are happened more due to the economical issues faced by the farmers and their families. The government should help them economically when they are in need and also help in the integration of cultivation techniques for more results. Many techniques, development, laws, schemes, technology should be bought out in the farming sector. The suicides of the farmers can be stopped in various ways by the government and many nature lovers. They only need support when they are at needed times.

Quotes on Farmers Suicides in India 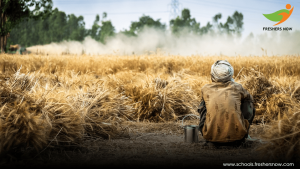