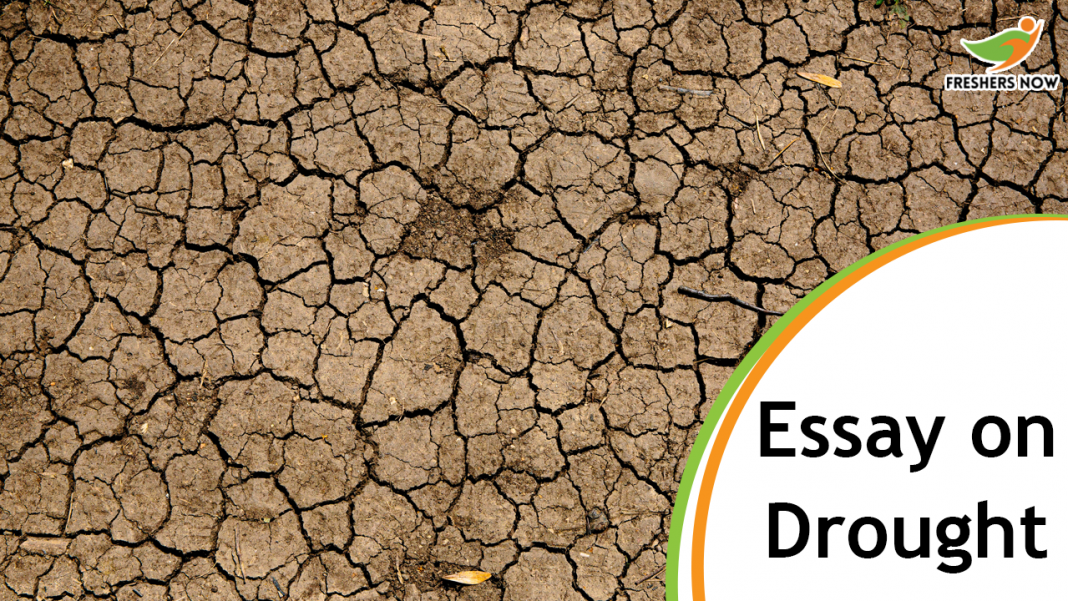 Essay on Drought for Students and Children – Types, Causes, Prevention Steps: Drought is one of both human and natural made disasters. The main cause to occur drought is the human activities around the area’s environmental conditions. The more damage to the environment the more is the chance of rising to droughts. All the living beings will suffer heavily and even to death due to droughts as similarly, the major part is by human beings. Droughts are a disaster that human beings can’t fight against and only nature has the power to abolish it. Droughts have the power to decide whether there is a need for the existence of living beings are not. Similarly, the essay on drought will contain its types, causes, prevention steps to remove, and much more information.

Drought is one of the dangerous environmental conditions which damages the quality of life on Earth. It exposes the harmful effect and even it is considered a natural disaster. Drought will usually occur when there is a shortage of any of the essential natural resources in a particular area. These droughts are majorly affecting mankind and all other living beings on the earth. Some countries face drought conditions heavily, due to improper environmental balances. Drought will usually arise with the damage of the nature around the area which leads to hotter climatic conditions and fewer rainfalls. The drought was further divided into three types depending on the shortage of essential natural resources. It damages agricultural cultivation and heavy damage to the lives of farmers. Drought brings up the scarcity of water, food, moisture in the air, and high temperature. Initially, it removes the moisture level from the surroundings, and later on, it eliminates the resources.

Causes to occur droughts are deforestation and a rise in temperatures. As trees are removed it leads to an increase in temperature and ecological imbalances in the areas. As the environment was imbalanced it rises to decrease the rainfalls and hot climatic conditions. Global Warming has the part to bring Drought to the environment. On the other side impact of the drought will be high on living beings on earth. It can abolish food, water and tends to hard financial condition to the people and the country. However, there are some prevention steps like reforestation, using solar energy, and many more to reduce the hot climates and to improve the climate conditions. These steps bring up the rains and necessary moisture conditions for the sustainment of humans and living beings.

Drought is a dangerous condition in nature where the scarcity of essential natural resources arises. These conditions are harmful to live beings and mankind where they can lead to death. Drought is nothing but the scarcity of water, food, which are due to climatic conditions. As the lesser rainfalls are seen in the areas which cause the droughts and chance to end of living beings. An example of a drought is the deserts where scarcity arises due to high temperature and less moisture climatic conditions. With increasing global pollution and global warming levels, drought will arise easily.

Droughts are further divided into four types namely Meteorological, Hydrological, Agricultural, and Socioeconomic. These all are happening due to the dry weather conditions that dominate in particular areas. As the drought arises it brings up the economical and environmental imbalances in the country or a particular area. There are some areas where the lesser rainfall and humid climatic conditions, there is a chance of observing droughts at a higher rate. People of these specific areas will face problems in their daily routine. Scarcity of essential resources is always present in the area and conditions of people are hard and move to a far distance to get resources.

The causes of droughts are many due to man-made activities and very limited natural activities. But the cause of damage for the droughts are due to humans at a higher rate and these are done every day. Whereas natural disaster occurs once and expose heavy damage. Natural activities like rising in temperature, orbital rotation of the earth, moisture levels in the atmosphere, and many others. Human activities like deforestation, global warming activities, etc. There are some other causes like air circulation, water availability, and some ecological imbalances.

The impact of the drought will be at a higher rate where the life span of human beings will decrease. drought will cut all the chains that are present in the ecosystem. All the living beings and nature will be impacted to a further extent which can remove everything on Planet Earth. However, some solution steps need to follow by human beings to the remove roots of droughts. Reforestation and planting of trees bring up the climatic changes in the environment and make fall the rains. These will develop greenness and remove all the pollution even. Every prevention step needs to follow for the removal of drought from the ecosystem.

Droughts are occurring due to various activities that are involved by human beings. Humans have the intelligence to change the environment in a good path and parallel fulfill their needs of them. Every individual in the ecosystem should feel responsible to follow the prevention steps for the improvement of nature for further decades. Everything is in the hands of human beings because there was the chance to reconstruct the issues less environment and healthy ecosystem.

Conclusion: We believe that the above essay on droughts contains all the information and more useful points to get awareness. These essays will helpful for UPSC aspirants and at competitions & exams for students.

Essay on Drought for Students and Children | PDF Download

Dear Students and Children, you can download the Drought Essay in the Hand Written Format by Clicking the Below Click Here Link.