The dowry system is a procedure that was followed throughout India for a long period. This system became an illegal procedure after misleading and other negative incidents occurred due to this system. However, it had become a social problem in Indian society and some economically weak families were greatly disturbed by this system. The main reason behind this system is to help married couples but with time, it decided the marriages of the people. Accordingly, the following essay on the dowry system contains the necessary information and the disadvantages. The essay on the evils of the dowry system contains brief information about the problems faced by the people.

Dowry System in India was built very deep in Indian society and every corner of the country. The main motto of the Dowry System is to help the newly married couple live for security and to fulfill their needs. The money or wealth that is transferred is to help until they settle in good positions. In some parts of India, the people will look at the dowry as seriously as the caste system. In modern days, most families treat new brides according to the amount of Dowry she brings. This dowry system makes the development of people and encourages greed in the people. The Dowry system is a burden and curse for the girl’s families at the time of marriage.

Dowry System is following from Ancient India for a good cause. As the days passed due to rules and many other greedy thoughts made the people demand the dowry. The dowry means the wealth or money given to the bride by their parents to live secure and independent after the marriage. This thought in the people was abolished, but now the amount of dowry will decide the marriage for the girls. Many middle-class families are suffering due to the Dowry system for marrying their girl child. The people in society know that the dowry system is illegal and they should inculcate that wealth is just a gift to the bride.

The journey of the Dowry System became an illegal activity because of British rule. In India, the dowry system has been followed from the past even before the British ruling. In those days it was not considered an illegal activity because of the positive way of thinking about the dowry system. During the British ruling in India, they bought a rule that no asserts should not be in the name of women or girls. By this rule, the Bride families started giving dowry, i.e. asserts in name of the Groom. From this point on, the thinking of people about Dowry was flipped in their minds.

As the dowry system was messed up by the rules, the thinking of people about the girl child in their families changed. The economically fit families did not have trouble with this dowry system, but the people below the poverty line are facing problems with this system. As people started thinking that a girl child in the family is a burden and curse to them. From then on the people started thinking about boys in the family rather than girls. This leads to an imbalance in the sex ratio in the country due to a decrease in girls. Then people encourage women to foeticide, leaving girl child after birth, and many other crimes for the girl child.

All the changes make the dowry a nightmare for the bride’s family during the time of marriage. If a girl was born into a below poverty line family from that time, the father starts to save the money for that day. In modern India, caste and dowry play an important role in the marriages of girls. Present days have become as dowry makes marriage for the girls, but people also see the bride or groom with dowry rather than qualities of them. As the people change, the groom’s families demand the dowry; even the bride’s parents also encourage the dowry and fulfill their demands. Even after the dowry, the treatment of the bride in the groom’s home is very bad, which leads to divorce and some even to death due to pressure.

As the illegal activities towards women and improper sex ratio in the country combine bought up the laws against the dowry. The Dowry Prohibition Act of 1961 is one of the laws against dowry. Under this law, the givers and takers of dowry are both to be punished. All the laws and care of the government had bought fear in people about the dowry, and it had been demolished to a certain extent in the country. 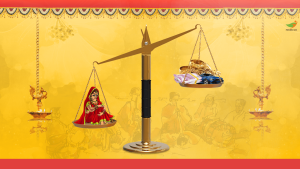 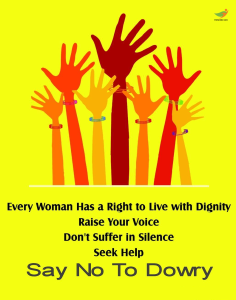 Conclusion: Dowry System in the present had become an illegal activity which caused many lives of women after the marriages. Nearly 8,000 women lead to death by the dowry system, according to data in India. To get an end and save women the strict rules and laws should be brought up by the government. The government and the NGOs who are against Dowry should work together to get awareness in people and teach them it is an illegal act, according to the government. It should go into the children of young age by Prohibition of Dowry system drawings, paintings, posters, and some competitions because they are the future of India.