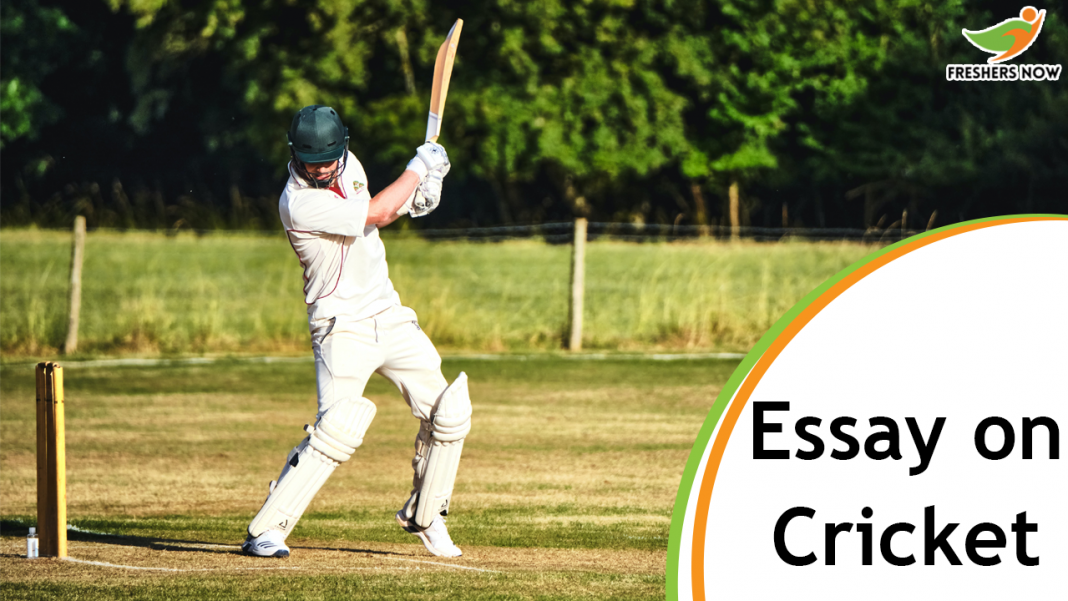 In this article, we are providing a short and long essay on cricket for students and children. Importance and history of cricket, Quotes, Images. Students can go through this page for more information on cricket.

Cricket has been originated in southeast England, it became the country’s national sport in the 18th century and has developed globally in the 19th and 20th centuries. International matches have been played since 1844 and Test cricket began recognized, in 1877. We also have a women’s cricket match.

These matches are played under the rules and regulations approved by the International Cricket Council.

Cricket is a professional outdoor sport played by people from different countries, especially at National and International levels. Cricket is a sport which is played between two teams with eleven players each.

In these two teams, one team chooses batting while another team is fielding. Runs are scored by hitting the ball, which is thrown by a bowler from the fielding team to a player from the batting team, across the boundary. The empire gives the score.

The wickets are sets at each end of a rectangle-shaped called ‘the pitch, which is 22 yards long. The area of play is a 30-yard circle inside the cricket ground or stadium. Two players get a chance of batting, one player at one end of the pitch while another player at another end of the pitch. When a player is “out”, a new teammate will replace by the same team. When a team is “not-out” players left to bat get the chance to score.

Cricket is the most popular sport in the world which is enjoyed by all ages of people. Their cricket matches are played between two teams of two eleven players each, before playing, the captains of both teams go to the umpire for the toss. The winner of the toss gets the option of choosing batting or bowling. The player behind the wicket is called the “wicket-keeper”.

Why Cricket is Famous in India?

Cricket is a famous game in India liked by all ages of people. It creates a lot of excitement among the fans of the game. It is the most-watched sport in India and people even miss their schools and offices when any major International match is proceeding. Even business icons are now investing more money for popularity. Moreover, fans risk everything to display their anger or affection towards cricket.

In other words, we can say that cricket is not merely a sport but an emotion in our country. People gather together to support their teammates and enjoy the match.

Here are some rules in Cricket Match

Best quotes by the cricketers

Conclusion: At last, We hope that the provided information on essays on cricket for students and children helps students to prepare for an essay writing competition.

Essay on Cricket for Students and Children | PDF Download

Dear Students and Children, you can download the Cricket Essay in the Hand Written Format by Clicking the Below Click Here Link.