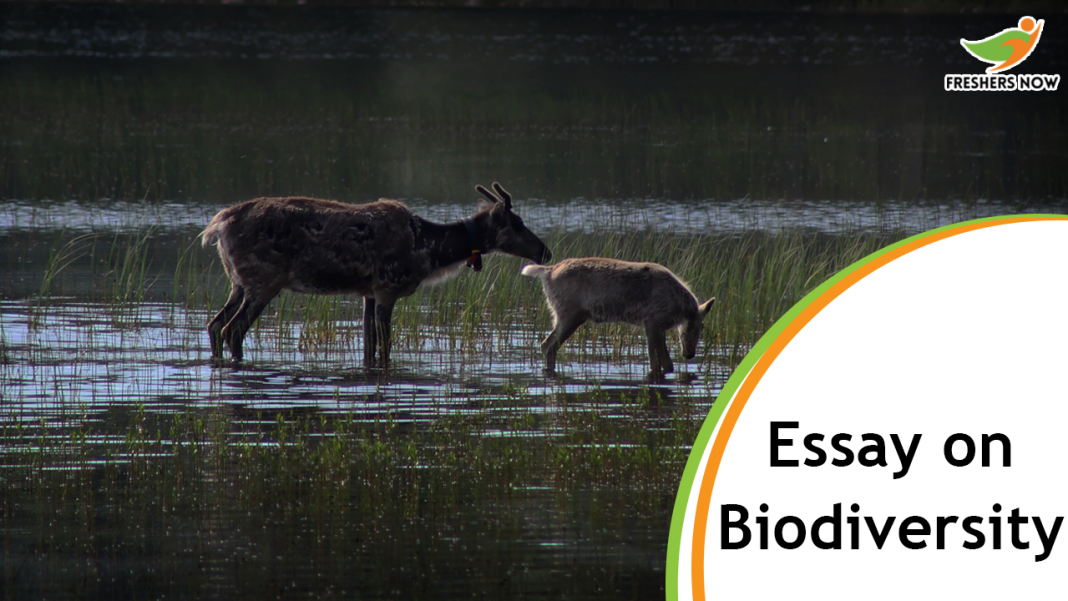 Biodiversity refers to the presence of plants and animals and their species in the ecosystem. These plants and animals have existed in different forms which makes diversity. The variations present between the animals or plants are due to species, Ecosystem, Habitat area, genetics of them. This biodiversity is important because it is the backbone for the existence of living beings or living things on Earth. In this Biodiversity, there is the presence of various types like Genetic, Species, Ecological diversity. These types depend on various aspects and bring up the existence of biodiversity in the ecosystem. The biodiversity contains various cycles like food, water, animals, and some more species cycles. It contains the different animals to present as food for the other animals and different plants for the usage of human beings. Biodiversity is the combination that needs to exist both the flora and fauna which is the backbone for the existence of living things.

In the present environment, there is a huge biodiversity loss which will lead to a serious threat to the lives of humans. All the pollutions which are made by human activities are leads to the cause of biodiversity loss. Every person should work on saving biodiversity and allot some areas to enrich the lives of flora and fauna which needs a better future in the environment. As the species are endangered due to the human needs activities and lead to an end to their lives in the environment. All the government and people should come together and work and enhance the species count and reduce the list of endangered species.

Biodiversity is the backbone for the presence of the environment and helps all living beings to live their lives. It even maintains the ecological balance of the planet Earth. However, there are millions of species like trees, plants, animals, insects, microorganisms, and many more. All these presences are important for the various needs of the environment building and even for the needs of human beings in the daily routine. As the biodiversity of different species is present in different areas with various climatic conditions. Some species will adapt to only cool areas whereas some can exist only in hot climates and some are in humid climates. This was purely dependent on the genetics and ecological sustainment of species.

Humans are completely dependent on plants and animals in the biodiversity for the need for food. They get the food majorly from the plants to sustain their lives on earth. But knowing these humans are destroying the diversity for other needs like land, wood, and many more rather than food. As the population of humans getting increasing day by day, maintaining the huge existence of people’s biodiversity has been damaging. If the Biodiversity or environment doesn’t provide the conditions it is hard to process the cultivation and tends to the scarcity of food and further no existence of humans.

Biodiversity is further divided into different types like Genetic, Species, Ecological diversities. Where genetic diversity is referred to as the passing of genetic components shared by the species. Species diversity happens when the habitat comprises various living organisms. Ecological diversity happens with the interaction of all living things and shares the available sources to produce energy in the ecosystem. All the species are important for the environment’s existence and also for the presence of some flora and fauna.

In the present days, biodiversity was getting destroyed by humans the gain their needs of them. This destroying activity leads to trouble for the lives of millions of plants and animals either directly or indirectly. As the population was increasing parallelly the need or demand for the food was increasing, as the food was purely dependent on plants and some animals. With the demand, the plants are driven but the parallel planting was not taking place. where this cause made the various species in the endangered list of species. As the roots of the various species are taken out by humans which causes the endangered and no presence of species in the ecosystem. As a result, it leads to breaking various food chains and the food for various other animals. however, saving diversity is more important for the existence of human lives in the future world.

Conclusion: As biodiversity is the backbone for balancing the environment and the climatic conditions, it is important to save and improve the welfare of all living organisms. As humans destroy biodiversity and disturb the various animal lives and cycles, it is responsible to recover the endangered species. Humans should allot some space of land for the needs of the Flora and Fauna improvement. Forests, Gardens, Endangered species areas, and some others should be buildup, and restricting human beings should be mandatory. Even now it can be improved which helps for the further generation in the environment of Planet Earth.

We believe that the above essay on Biodiversity provided you with all the basic information and needs to improve biodiversity and much more valuable information. The Biodiversity essay will useful for aspirants of UPSC and students at exams.

Essay on Biodiversity for Students and Children | PDF Download

Dear Students and Children, you can download the Biodiversity Essay in the Hand Written Format by Clicking the Below Click Here Link.