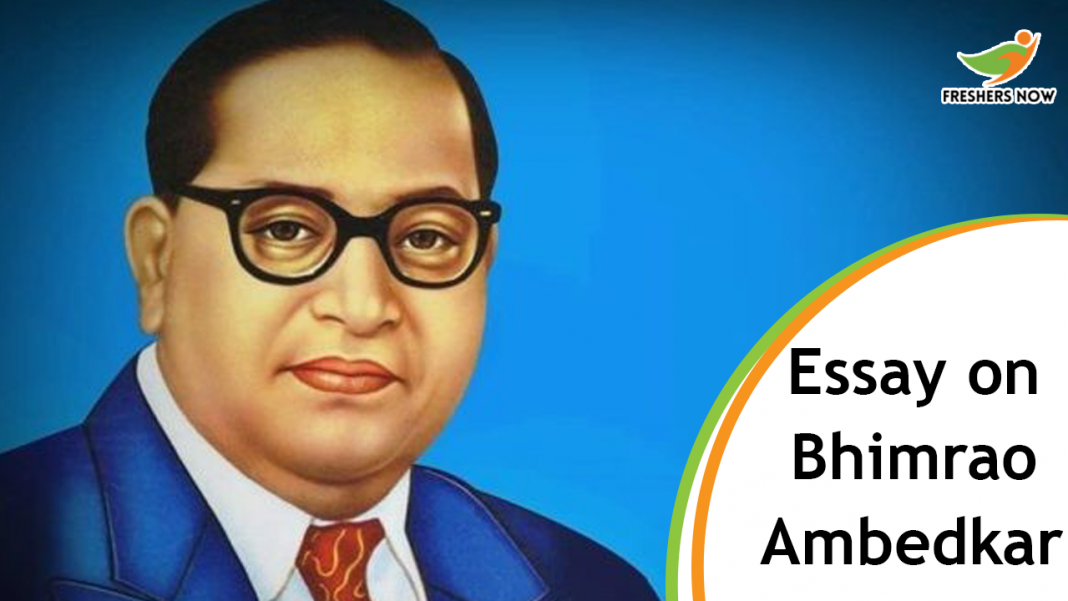 In this article, we have provided an Essay on Bhimrao Ambedkar: An Introduction, Short Essay, Long Essay, Quotes, Images. For complete information about Dr. B. R. Ambedkar go through the complete article till the end.

This is an Introduction to the Essay on Bhimrao Ambedkar. Dr. B. R. Ambedkar is a scholar, social reformer, politician. Ambedkar is the first person in Dalits who completed his education. He is considered as the God for Dalits for equality along with the others. His contributions made India shape into a better country. He is the first person to form the Indian Constitution after Independence. He is one of the great leaders among all the leaders for the freedom struggle. He has his significance by the way of drafting the constitution for India.

This is the Short Essay on Bhimrao Ambedkar. Dr. Babasaheb Ambedkar commonly known as Dr.B.R. Ambedkar was born on April 14, 1990. His parents are Bhimabai and Ramji Maloji Sakpal. Ambedkar was born in the poor Mahar caste who are considered as the untouchables at that time. Ambedkar attended the school and there he faced a lot of discrimination by the higher caste children.

The lower caste people are not allowed to sit inside the class and also had less help from the teachers. In 1897, he studied at Elphinstone High School. At the age of 15, he married Ramabai. In the year 1907, he passed his matriculation. Later in 1912, he graduated with a degree in economics and political science from Bombay University. He moved to the United States in 1913 and completed his postgraduation.

He completed his D.Sc in Economics in 1923 at the University of London. In 1927, Ambedkar decided to revolt against the untouchables and led a movement on untouchability. For the sake of this movement, he did marches with the support of the public. In 1930, he launched the Kalaram Temple Movement with the support of the people he marched towards the Brahmin authorities, and by the time they reached the gates were closed by them.

In 1932, “Depressed Classes” a separate electorate was announced to form. Poona Pact agreement was signed by Dr. B.R. Ambedkar and Madan Mohan Malaviya for justice for the untouchables. In 1936, he founded the Independent Labour Party. Later he was appointed as the chairman of the Constitution Drafting Committee and was made to write the new Constitution for India.

Thereafter, in 1951 he established the Finance Commission of India, upon the opposition of the taxation on lower-income groups. He wrote books namely The Problem of the Rupee: Its Origin and Its Solution, Administration and Finance of the East India Company, The Evolution of Provincial Finance in British India. Later on, he decided to convert to Sikhism later on he wrote a book on Buddhism. In 1948 he fell sick by suffering from diabetes and died on December 6, 1956, in Delhi.

The complete life history of Ambedkar is explained in the Long Essay on Bhimrao Ambedkar. Dr. Babasaheb Ambedkar was shortly called Bhim or Babasaheb by many of the people. Ambedkar was a great scholar, activist, Social reformer. Dr. B. R. Ambedkar was born on 14 April 1891 in Mhow, Madhya Pradesh. He belongs to the Marathi family of Ambadawe in Ratnagiri of Madhya Pradesh. His parents are father Ramji Maloji Sakpal, who is an army officer, and mother Bhimabai Sakpal. He belongs to the Mahar caste and was treated as untouchables.

The education of Ambedkar made a greater significance in the history of India. Dr. B. R. Ambedkar is the first person in Dalits who complete education. In 1897, Ambedkar and his family moved to Mumbai and there he was joined in Elphinstone High School. After attaining the age of 15, Ambedkar married Ramabai in 1906. Later he completed his matriculation and joined Elphinstone College in 1907. He obtained his degree in Political Science and Economics in the year 1912. In the coming year, in 1913 he moved to the United States at the age of 22.

He got an opportunity by Baroda scholarship for the study of Post-graduation in Columbia University at New York. There he completed his M.A in Economics. After that, he presented a thesis on Ancient Indian Commerce, and his second thesis on National Dividend India was completed in the year 1916. In the same year, he joined in London School of Economics. In 1917, his scholarship was completed and he returned to India. He got permission to return to London and submit his thesis. By this, he returned to London and completed postgraduation in 1921. He completed his doctorate D.Sc in Economics in 1923.

Dr. B. R. Ambedkar is the most powerful on the concept of untouchability. He strongly opposed untouchability and against the rights and reservations for Dalits. he tried to uplift the education for Dalits when he was working as a lawyer in Bombay High Court. His first attempt was made in Bahishkrit Hitakarini Sabha for the empowerment of the Dalits. He launched movements against untouchability, he got great support from many people and he made marches to open up drink resources.

In 1930, he launched the Kalaram Temple movement which focused on the rights of Dalits for entrance into the Hindu temples. In 1932, the British announced a separate electorate for the”Depressed Classes”. For this, the agreement was signed by Dr. B. R. Ambedkar and Madan Mohan Malaviya, and the agreement is called the “Poona Pact”. His political career has been started in the year 1936 and founded a party called as Independent Labour Party and he won with the majority of votes.

Ambedkar was invited for the Nation’s Law Minister. He is appointed as the Chairman of the Constitution Drafting Committee and was asked to write India’s New Constitution. He wrote the constitution with flexibility for each citizen in the Nation. He included all the rights and policies for all the citizens by eliminating untouchability, freedom of religion, abolishing all types of discrimination. He is the first person to introduce a reservation system for the backward classes namely Scheduled Castes and Scheduled Tribes and other backward castes. Finally, Constitution was adopted on November 26, 1949, by the constituent Assembly.

Ambedkar is the first Indian person who receive a Doctorate in Economics from States. He fought for agricultural and industrial growth in India. In 1951, the Finance Commission of India was established for the fight against the taxation for living on the lower-income groups. He wrote books on Economics namely The Evolution of Provincial Finance in British India, The Problem of the Rupee: Its Origin and Its Solution, Administration and Finance of the East India Company. Ambedkar decided to convert to Sikhism, he said that he was writing a book and by the completion of it he would turn into Buddhism. This great person was sick since 1948 and fell on the bed with severe health problems and he died on December 6, 1956, in Delhi. In the year 1990, he received Bharat Ratna. His birthday is celebrated as “Ambedkar Jayanthi” and it is declared as a public holiday by the government. 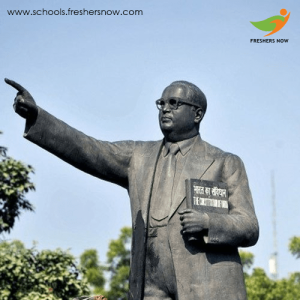 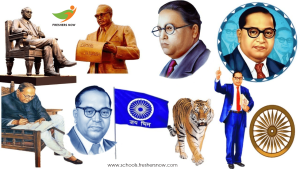 Conclusion: In the Conclusion of the Essay on Bhimrao Ambedkar, he is considered as the legendary person for his struggle for the backward classes. He fought for the rights of equal justice along with the other castes. He made significant efforts for the welfare of the scheduled castes. He made a completely new constitution with all the equal rights for the citizens. Hence, he stands first in history for his enormous efforts for the country.

Essay on Bhimrao Ambedkar for Students and Children | PDF Download

Dear Students and Children, you can download the Bhimrao Ambedkar Essay in the Hand Written Format by Clicking the Below Click Here Link.