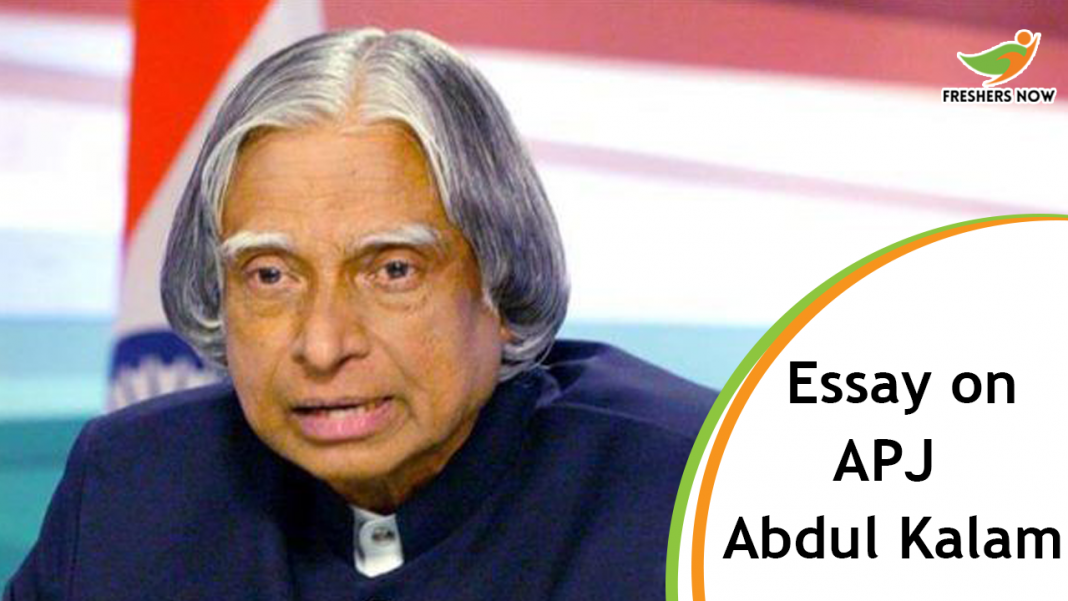 This is the Short Introduction for the Essay on APJ Abdul Kalam. Avul Pakir Jainulabdeen Abdul Kalam is the missile man of India. APJ Abdul Kalam is one of the great people who is recognized and renowned by everyone all over the country. APJ Abdul Kalam made a tremendous contribution to ISRO (Indian Space Research Organization). His thought is to make India the superpower by Science & Technology. He made his efforts in the projects which are helpful for the nation’s progress.

APJ Abdul Kalam served India as the 11th President. Abdul Kalam is considered the most eminent person which has made Indians feel proud of his contributions as an Aerospace Scientist. Kalam is one of the great people that Indians still feel proud about his great efforts for the country.

This is the Short Essay on APJ Abdul Kalam who introduces the complete life of APJ Abdul Kalam concisely. Avul Pakir Jainulabdeen Abdul Kalam was born on 15 October 1931 in Rameswaram, Tamilnadu. His parents, father Jainulabdeen a boat owner, and mother Ashiamma is a homemaker. Basically, from the age of his childhood the economic situation of his family was so poor, so for that reason kalam supported his family financially but never neglected his studies.

Abdul Kalam studied in Schwartz Higher Secondary School and completed his schooling. Later on, he moved to Saint Joseph’s College and then moved to the University of Madras and completed his graduation in Physics. he moved to Madras to study aerospace engineering at Madras Institute of Technology in the year 1955.

Abdul Kalam joined the Aeronautical Development Establishment of Defence Research and Defence Organisation, later he was unsatisfied with the job as DRDO. Later he ranked 9th among the 8 positions that are made available at that time. Abdul Kalam is the most ever-talented person, who is more passionate about the dream of becoming a Pilot. He headed many projects and they all are very successful in all times of history. Kalam is part and also made his contributions in Agni and Prudhvi missiles. He is also part of famous
the mission called “Nuclear Power” and gained the name the “Missile Man of India” as a lifetime achievement.

APJ Abdul Kalam became the President in the year 2002. He made tremendous contributions to the country during his presidency period. The people of the country are happy by the ruling and also the government by him so he is called the “People’s Man” for the country. He wanted to become President for One more time to serve the people by destiny the dream is not fulfilled. Later on, he returned to his past life and taught children with love and affection.

Abdul Kalam received the most prestigious awards all over his lifetime. He is an author, teacher, Scientist, etc. Kalam wrote many books all through his lifetime and those books are most famous all over the Nation. His books are the most inspiring and motivating for the students to achieve their dreams. He passed away on July 27, 2015, while delivering a speech.

Here is the Long Essay on APJ Abdul Kalam a complete view about this life. Avul Pakir Jainulabdeen Abdul Kalam shortly called APJ Abdul Kalam was born on 15 October 1931 to a Tamil Muslim family Rameswaram, Tamilnadu. Abdul Kalam is the youngest among four brothers and one sister.APJ Abdul Kalam Birthday is celebrated as “World’s Students Day”. He belongs to a very poor family which made him support his family at a very young age by selling the newspapers. His parents, father Jainulabdeen a boat owner, mother Ashiamma is very simple person who takes care of all the household issues.

Kalam is more passionate about studies and never discontinued or neglected his studies. Kalam since his childhood is more interested to fly like birds so with that aim he wanted to become a Pilot. At the age of his study Kalam spent hours together studying and never left the books. He studied with a dream to become a pilot and he made all his efforts in the ways possible to achieve the goal.

Kalam was sent to school for his studies and completed his schooling in Schwartz Higher Secondary School, Ramanathapuram. Later on, went to Saints Joseph’s College, Tiruchirappalli for his graduation in Physics. Thereon he moved to Madras University of Technology for studying Aerospace Engineering in 1955. After the completion of his graduation, he joined the Aeronautical Development Establishment of Defence Research and Defence Organisation.

He started his career as the choice of the job as DRDO. But he is not satisfied with the job and thereafter he moved to ISRO to work as the project director in the space station. He launched the satellite called “Rohini” under his leadership. His image has increased tremendously for the efforts that are made for the progress of the satellites.

APJ Abdul Kalam in 1963-1964 visited NASA in Hampton. He was invited by Dr. Raja Ramanna for the nuclear test. He also directed the two major projects called Project Devil and Project Valiant and they are successful by him. Prime Minister Indira Gandhi allotted the funds for the aerospace projects under the leadership and direction of kalam. Integrated Guided Missile Development Programme(IGMDP) was under the direction of Kalam and he is the Chief Executive for this project. The two greatest missiles named “Agni” and “Prudhvi” are the major projects that gained a lot of significance for him.

Kalam made an entry into politics and became the 11th President of India on 25th July 2002. He won the elections with the majority of votes upon the Lakshmi Sehgal. He occupied his seat in Rashtrapati Bhawan. He served India from 2002-2007. The people of India liked him for the great efforts he made for the country. So he is called “People’s Man”. By the end of his term, he wanted to become the President one more time. But this time he did not succeed in the elections. By that, he again returned to his normal life and continued his life by teaching children.

APJ Abdul Kalam received many prestigious awards including the highest civilian award Bharat Ratna. He received Padma Bhushan in 1981 and Padma Vibhushan in 1990 for his work in ISRO. In 2012 he was ranked 2 in Outlook India’s poll of the Greatest Indian. The state government has declared a “Dr. A. P. J Abdul Kalam Award” with 8 grams of a gold medal and a cash prize of Rs.500,000 and a certificate. This award is given on the Independence of every year for the achievements in Science and Technology. Kalam is also a great author his famous books are ‘Wings of Fire’, ‘Ignited Minds’, ‘India 2020- A vision of the New Millennium’.

Kalam passed away on July 27, 2015, while delivering a lecture on “Creating a Livable Planet Earth” at the Indian Institute of Management, Shillong. His body was taken by helicopter to Guwahati. And his body is wrapped in the Tricolor flag and it is presented in the open area for the people to see. Later on, the body is taken to the town of Mandapam, and from there it is taken in a truck to his native birthplace Rameswaram. Many ministers from across the States attended his last rites. 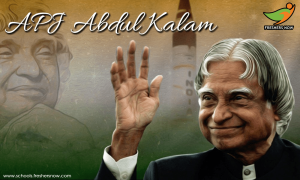 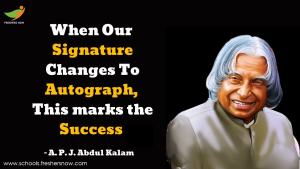 Conclusion: In the Conclusion of the Essay on APJ Abdul Kalam, it is regarded as a great privilege for such a great icon in the history of India. He is regarded as the boon of Science & Technology and made many efforts to make India the superpower. His everlasting love for the country made him be a successful man.

Dear Students and Children, you can download the APJ Abdul Kalam Essay in the Hand Written Format by Clicking the Below Click Here Link.