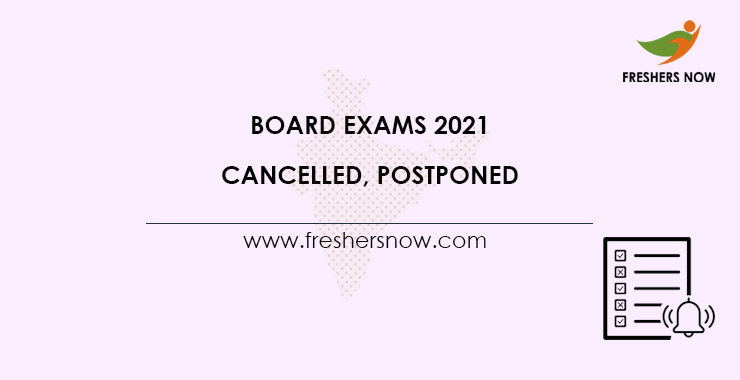 Board Exams 2021 Cancelled, Postponed | State Wise Cancelled Or Postponed Board Exams List: As the second wave of COVID-19 Cases is rapidly increasing in the country, the Central and State Governments are enforced to Cancelled or Postponed the various Board Exams like Chhatisgarh, Haryana, Himachal Pradesh, Jammu & Kashmir, Maharashtra, Madhya Pradesh, Odisha, Punjab, Rajasthan, Tamil Nadu, Uttar Pradesh, CISCE, Uttarakhand, Manipur, Assam, West Bengal etc. And Some of the Board officials decided to conduct the Exams As Per Schedule they are Andhra Pradesh, Telangana Gujarat, Goa, Jharkhand, Kerala, Karnataka, Mizoram, Meghalaya, Nagaland, Tripura.

Many of the states have released the Date Sheets and few of the states had already started conducting the examinations. But keeping in view the Health of the aspirants, the authorities had decided to reconsider the exams. Apart from this, Bihar is the only state which conducted the exams and announced the results. So, we are here to give a quick glance to the 10th/ SSC/ SSLC/ Madhyamik, 11th/ +1/ Junior Inter, 12th/ HSC/ PUC students of various Boards regarding the status of their Board Exams. From this candidates can know whether the respective Board Exams are Postponed, Cancelled, or will be held as per the schedule.

As per the latest news, the officials of the AP Board have Cancelled the AP 10th and Inter Exams. Board members of Telangana have Cancelled the IS Inter 2nd Year Exams due to the COVID-19. 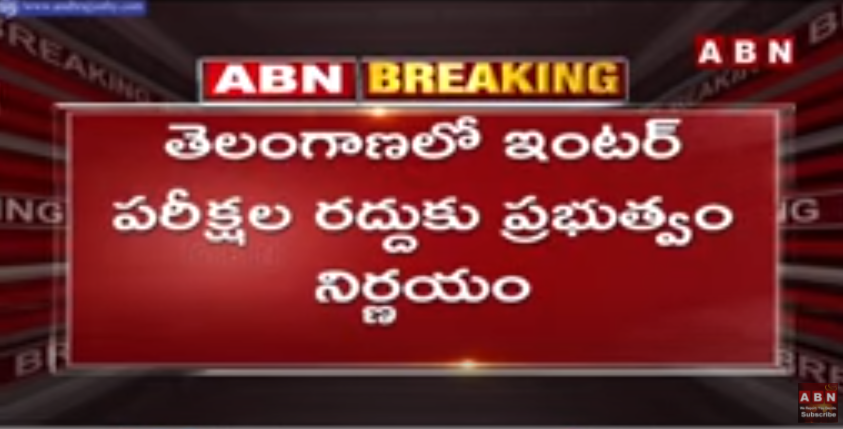 The officials of the Goa Board have Cancelled the 10th, 12th Exams was announced by Chief Minister Pramod Sawant.

Due to the raise of the COVID-19, the UP Board 12th Exams are Cancelled.

The board members of Rajasthan have decided to Cancel the RBSE 10th, 12th Exams due to the raise of the COVID-19.

The officials of the Haryana Board have decided to Cancel the Haryana 12th Class Exams due to the raise of COVID-19.

As per the latest news, the ISC Class 12 Exams Cancelled by the CISCE board

Due to the raise of the COVID-19, the officials of the CBSE have Cancelled the CBSE 12th Exams.

Due to rasing of the COVID-19 cases, the board officials have Postponed the Exams for AP SSC/ 10th Class.

As per the latest news, the officials of Gujarat have Cancelled the 10th class Exams due to the raising of COVID-19.

As per the latest news, the West Bengal Board of Secondary Education president, Kalyanmoy Ganguly informed the school education department that “It is not possible to conduct the Madhyamik examination from this scheduled date of June 1. If the exams are to be postponed or canceled is a call which needs to be taken by the state government.”

Jai Ram Thakur, Chief Minister of Himachal Pradesh had announced that the 10th Exams are Cancelled and 12th Class Exams are Postponed till further notice.

As per the latest news, the board members of the Assam have Postponed the Exams for HS 1st Year Exams. The decision on Assam 10th 12th Board Exams 2021 has taken. And the Decision for the 10th, 12th Exams Postponed. 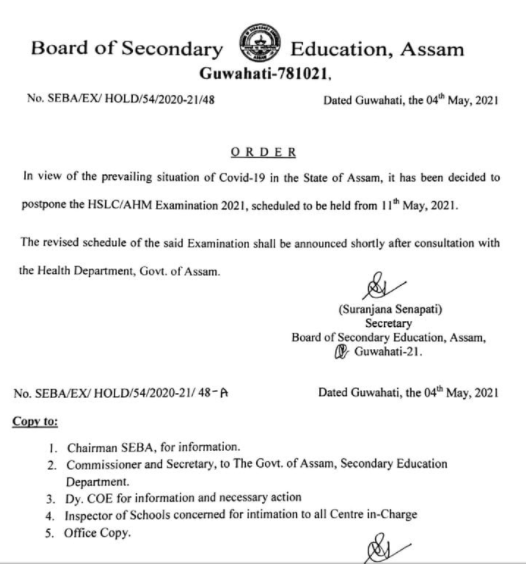 The Board Members of Andhra Pradesh are decided to Postponed the Exams for AP inter 1st, AP Inter 2nd Year due to the raising of COVID-19.

The officials of the MP Board have decided to Cancel the 10th Class Exams due to COVID-19. 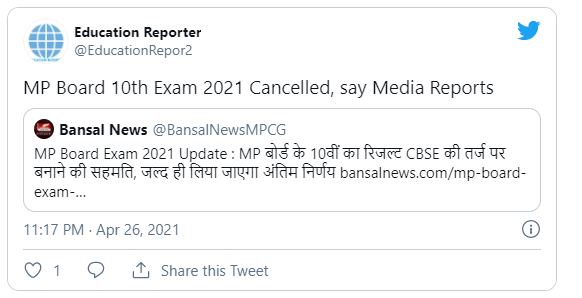 Education Minister Premsai Singh of Chhattisgarh has announced that the Class 10 Exams are Cancelled and Class 12 Exams have been Postponed due to the raising of COVID-19.

Due to COVID-19, the officials have Cancelled the Exams for Maharashtra Class 10 Students. All the students from the 12th Class under Maharashtra State have to know the officials have Postponed the Exams.

Students under Class 10 and Class 12 fall in Manipur state have to know that the officials have Postponed the Exams due to the COVID-19 pandemic. 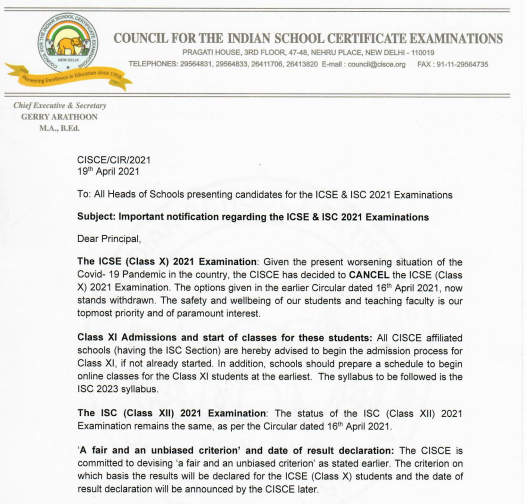 The Chief Minister Kalvakuntla Chandrashekhar Rao after a meeting with Education Minister, Patlolla Sabitha Indra Reddy and Special chief secretary of Education Chitra Ramachandran had decided to cancel the 10th & 11th Class Exams and postponing of the 12th Class Exams. 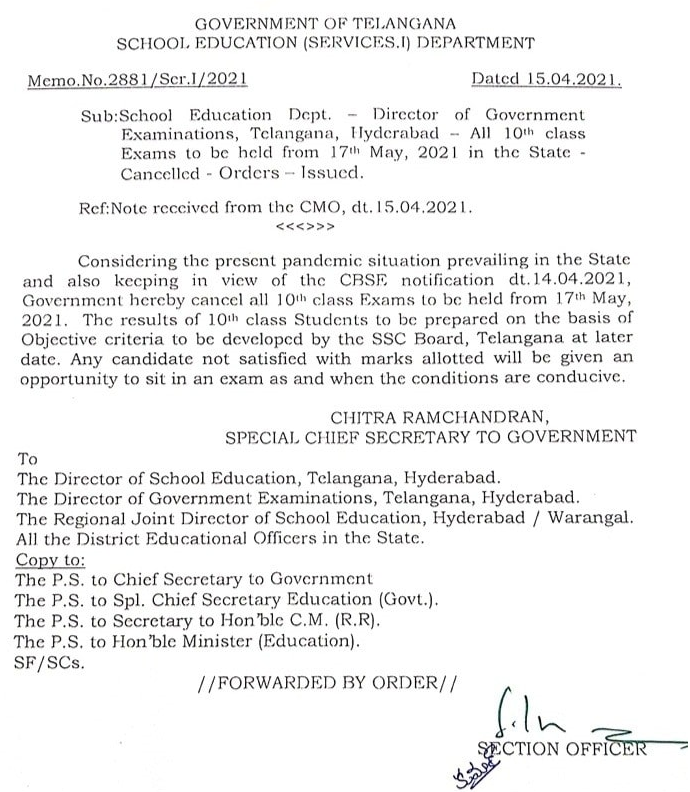 Naveen Patnaik, the Chief Minister of Odisha had announced that the 10th and 12th Class Exams will be Postponed in view of an increase in COVID-19 cases in the State. 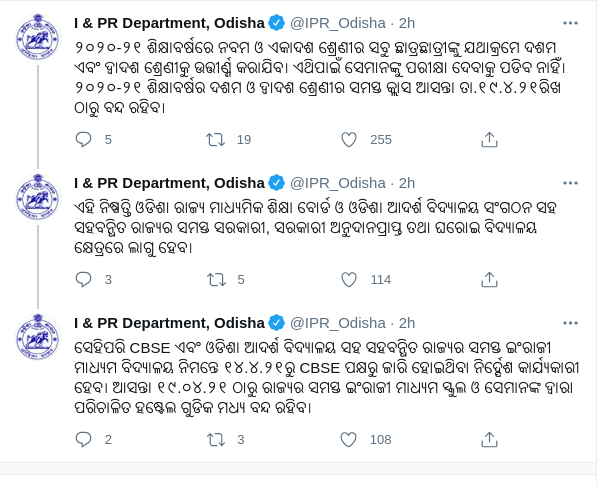 The Board of School Education Haryana (BSEH) had cancelled the 10th Exams and postponed the 12th Exams.

Gujarat Government has recently announced the postponement of 10th Class Exams and 12th Class Board Exams. And the students 1st Class to 9th Class and 11th Class will be promoted to next class.

Uttar Pradesh Government had postponed the 10th Class and 12th Class exams. The Schools and colleges remain closed till May 15 and no Exam will be conducted during this period. 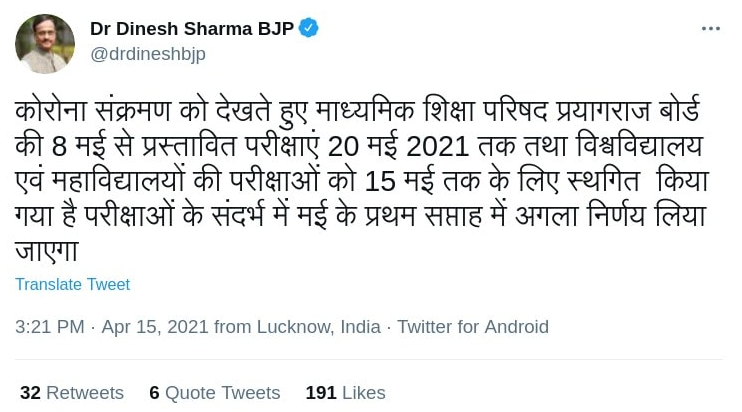 The Punjab Government have decided to promote all class 5,8 &10 students without examinations. The 12th Class exams are postponed and will be conducted when the situation is improved. 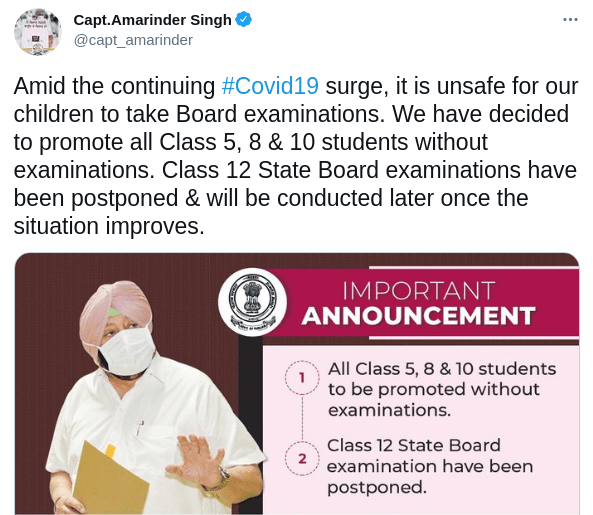 The Pramod Pandurang Sawant, Chief Minister of Goa had announced that they not yet decided to Cancel the Goa Board Exams.

The 10th and 12th Class Exam will be held as per the Scheduled Dates. 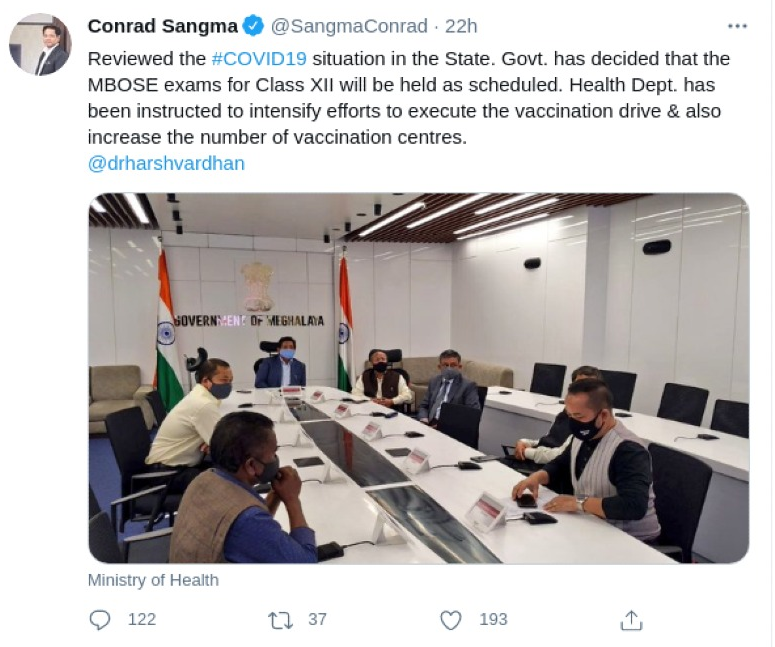 The Education Minister announced that CBSE 10th Class Board Exams are cancelled and the 12th Class Exams are postponed. After accessing the current situation, the board will issue the Notice at least 15 days before the CBSE 12th Class Exam Date. 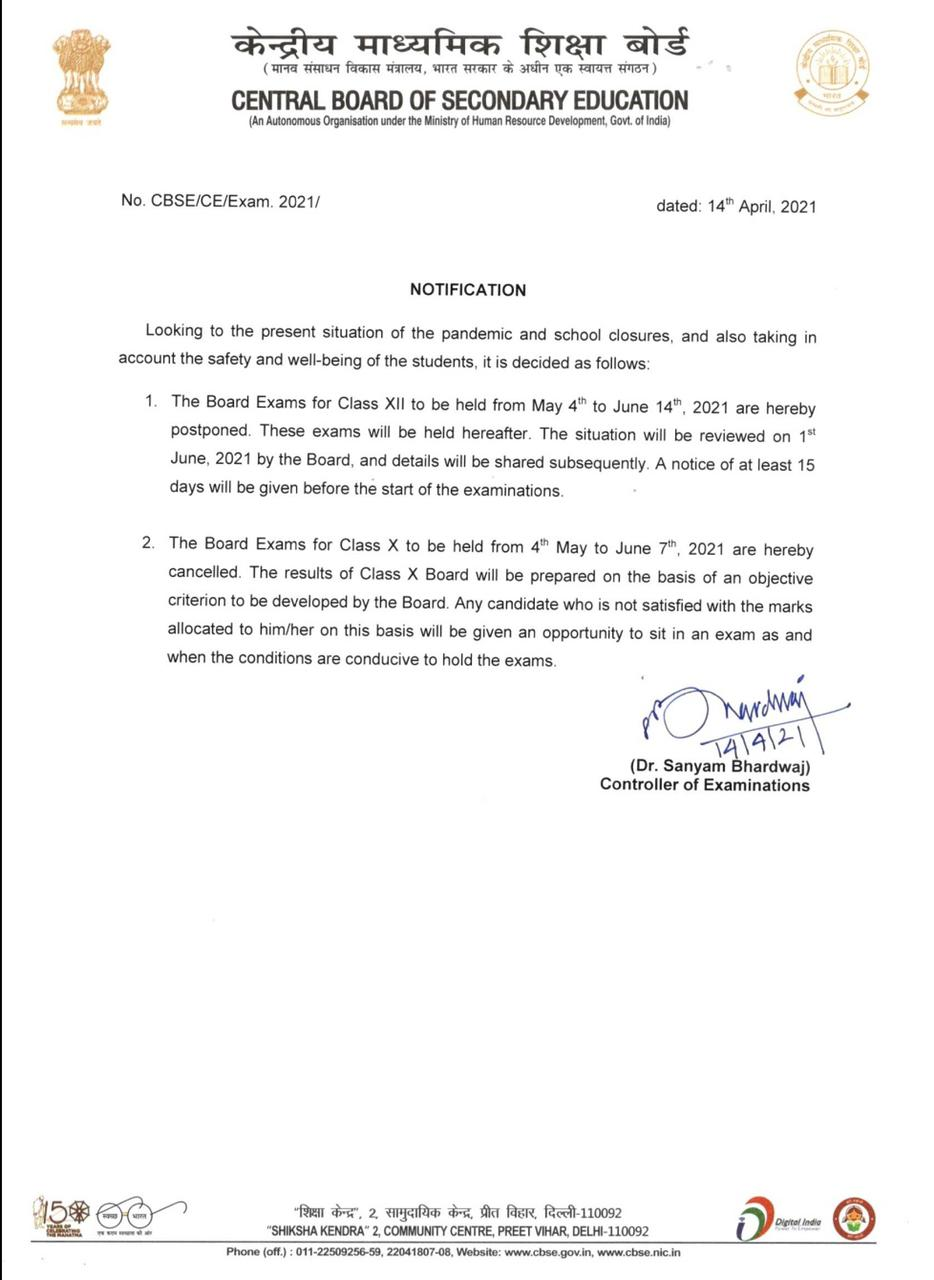 After the discussions held by Ashok Gehlot, the Chief Minister and the Govind Singh Dotasra, the Education Minister decided to postpone the 10th and 12th Exams and the students of 8th, 9th, and 11th Class will get promoted to the next class in view of Pandemic. 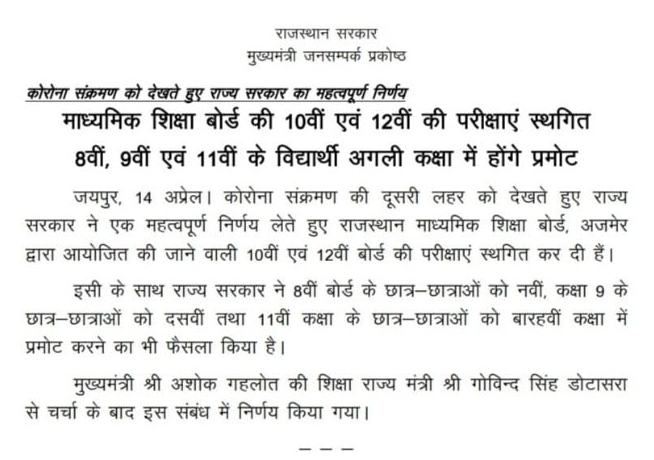 As per the latest reports, the Health Minister of Tamil Nadu had announced the cancellation of TN State Class 10th boards exams.

The Madhya Pradesh Board of Secondary Education (MPBSE) had decided to postpone the 12th Class Exams till 1 Month. 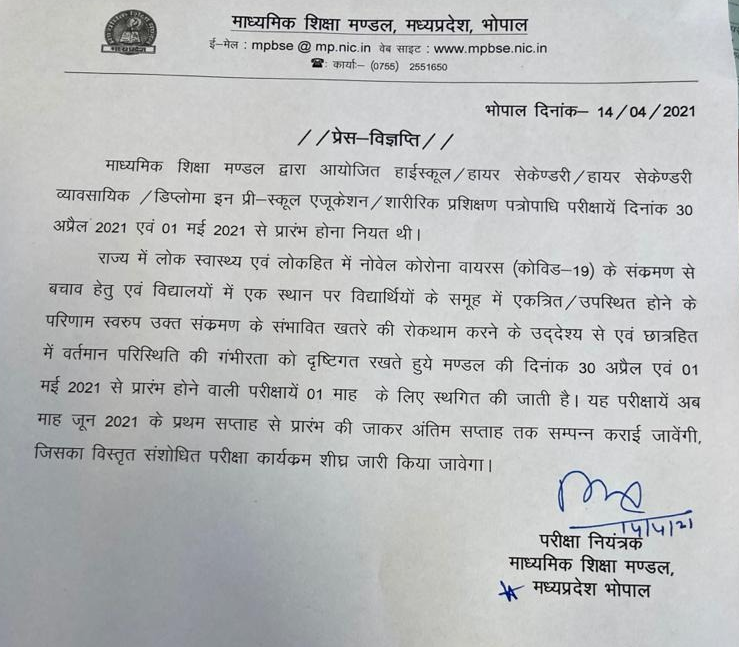 The Lt. Governor of J&K had announced that the JKBOSE Class 10 ongoing exams for remaining subjects are cancelled and the promotion for Class 11 will be based on the performance in the undertaken exams & Internal assessment. The JKBOSE 12th Class Exams will be postponed and reviewed after one month. 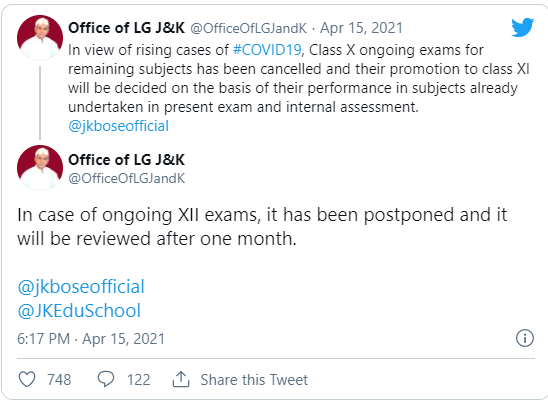 For Which States 10th Class Exams are Cancelled?

For which States, 12th Class Exams will be held as per schedule?

The 12th Class Exams will be held as per schedule in Goa, Jharkhand, Kerala, Karnataka, Mizoram, Meghalaya, Nagaland, Tripura States.

Can I Get Updated Information on postponing, cancellation of exams from this page?

Yes, aspirants can get Updated Information on postponing, cancellation of exams from schools.freshersnow.com.