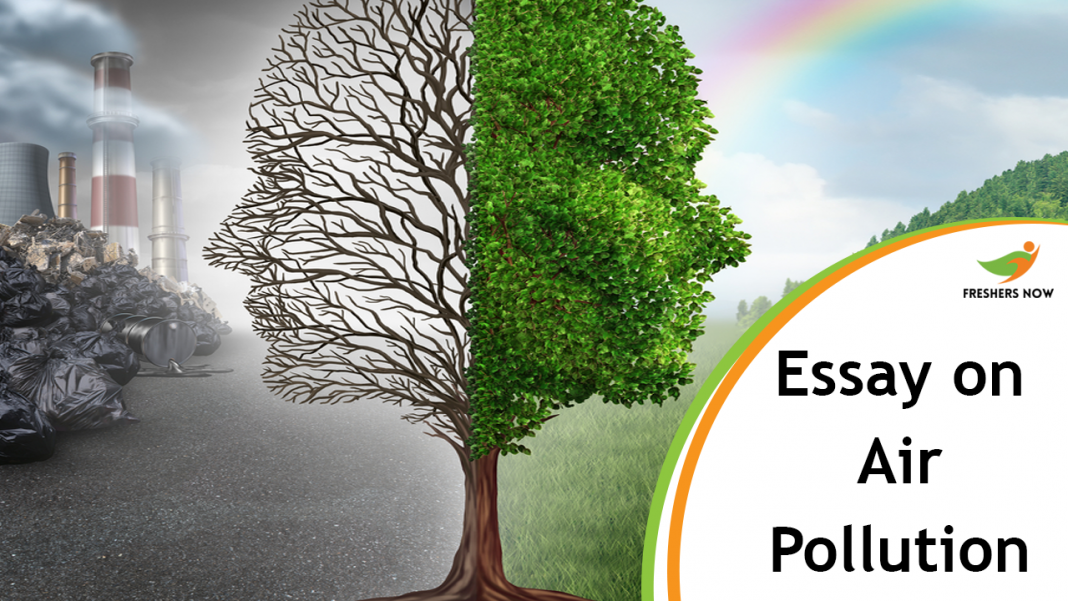 Air Pollution Essay For Students & Children: Air Pollution refers to the adding up of the impurities or toxic gases in the fresh and pure air. The adding-up process was due to the natural disaster and majorly with human activities. All the living beings on earth need pure air for the existence of life on Planet Earth. Even the whole environment runs with the air itself, the existence of the environment is highly impossible. Air is the combination of various useful and harmful gases, where the useful and needed are Oxygen and Carbon dioxide. Similarly, the below Air Pollution Essay contains the Effects, Causes, ways of control, and much more information. The Quotes on Air Pollution are listed further below in the article.

Air is one of the essential Natural resources for living beings in the Environment. The Environment runs completely with the Air and its categories. No human life can survive without the oxygen on Earth. As the people or humans know that Air is important for their existence but the needs of the human lead to pollution of it. With the intelligence of the human started using the environment to reach the needs of daily life. But the ways are harming and polluting the natural resources and the worthy environment. There are various causes of Air pollution are industrialization, Greenhouse Gases, the Buring of Plastic and Organic waste, Harmful Gases, Deforestation, etc. The major cause of Air pollution is Industrialization, as the count of industries increasing to fulfill the needs of humans. Where these expose harmful gases and dense air into the atmosphere and combine with pure air results in pollutant air.

Air pollution leads to various problems for the Environment and Human beings. Humans affect by many breathing problems and asthma issues. As the pollutant air gets mixed up with the blood of the humans which can tend to the death of the humans. The effect on the environment is increasing in global warming, Decrease of useful air, etc. As there are solutions to reduce Air pollution are policies for Industries, Reforestation, Using eco-friendly products, an increase in the use of electric vehicles, and many more. Every person should be responsible for reducing Air pollution and encouraging eco-friendly ways for the future sustain of lives on Planet Earth.

Air Pollution means the mixing of contaminants or impurities with the pure and fresh air present in the environment. The contaminants or impurities are from human activities and some are from natural calamities. Air present in the environment is worthy where there is no alternative for natural resources. Air present in the environment is the combination of various useful gases like Oxygen, Carbon dioxide, etc. However ever Oxygen was available in less amount and it was available with the combination of others. But the combinations are not useful for humans, plants are the production of oxygen for living beings. As the trees are decreasing the level of air for the humans get decreases and available content is getting polluted by the needs of humans. All these causes combine and result in the need for pure air for humans.

Air pollution was present before the life of human beings is by natural disaster in the environment. Natural disasters like Forest Fire, Volcanic eruptions. By the forest fire, a lot of harmful gases are released into the environment which raises the temperatures. Whereas by the volcanic eruptions huge unwanted gases and ash were mixed in the air and damages the pure air in the atmosphere. However, the damage of air was happening and continuing before human existence itself. But the damage was healed by the forest and the other greenery on Planet Earth.

The major part of Air Pollution is by human activities, these activities are developed by the human to reach the needs for the existence and daily routine. By the intelligence of humans started developing the needs for daily routine by using the environment. Industrialization, Deforestation, Buring of Organic Waste, Listing of Plastic contents, Electricity production, Mining of ores, Combustion of chemicals and liquids like Petrol, etc. There are many of the causes done by the humans knowing that pollutes the air, but for the needs of existence, it was doing. This pollution will decrease the level of oxygen in the environment which is essential for living beings.

Industries which run for the needs of humans, where the harmful gases are released in the production process and these are in large amount and can’t be stored. Using vehicles that release harmful gases by combustion of liquids. In the process of mining the microparticles mixed with air and pollute the air. The burning of plastic and organic waste releases toxic gases like dioxins, Furans, Polychlorinated biphenyls, etc which are harmful to the environment and even the health of human beings. However, the trees produced oxygen but by the human needs, deforestation takes place ie cutting of trees. The increase in Global Warming in the ecosystem is by Air pollution majorly.

However, there are solutions for the causes of Air pollution for human activities. No human cannot stop natural calamities and their damage to the environment. Nature-made damage can be balanced with the solution of human activities. To reduce air pollution the use of industries should be reduced and parallelly reforestation and plants must be increase. Usage of public transport can be raised in place of their transportation. Recycling plastic and organic waste should be done instead of burning. Similarly, for every human-made damage to the environment, there is an alternative in nature to fulfill the needs.

As the need to control air pollution arises, people should look over it by following all the necessary ways. The ways bring up the control of the pollution and cover the damage happened from the earlier years. The government should look at the issues which produce more effect of Air pollution and bring up the policies to them. Every person should take part in controlling air pollution by planting trees and increasing reforestation. All the ways can bring a change in the level of pollution and helps to increase the life of living beings on Planet Earth. Every person and government should work together for the welfare of the environment and the future generations on Earth.

Conclusion: We believe that the above Air pollution Essay had provided the basic information about its causes, Methods to reduce, and much more needed information. Air pollution essay will helpful for students and aspirants of UPSC.

Dear Students and Children, you can download the Air Pollution Essay in the Hand Written Format by Clicking the Below Click Here Link.